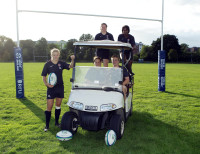 E-Z-GO, the manufacturer of golf cars, personnel shuttles and utility vehicles, supported the recent Women's Rugby World Cup which took place at the Surrey Sports Park, providing a fleet of electric shuttles and an ambulance vehicle for use at the tournament. E-Z-GO is a Textron Inc. (NYSE: TXT) company

All of the preliminary round games were played at the Surrey Sports Park with the semi-finals and final taking place at Twickenham's Stoop stadium, the home to Harlequins RFU. New Zealand beat England 13-10 in a thrilling final, watched by a crowd of almost 14,000.

E-Z-GO provided a fleet of 10 electric RXV 2+2 shuttles, which can be used for transporting up to four people or, with the rear seats folded, converted in an instant to a two-seater with a load platform for carrying a wide range of items and equipment. The company also provided a mini-ambulance, complete with stretcher and emergency equipment, in case of injury to the players or spectator illness.

Rosie Williams, managing director of the Women's Rugby Football Union said, "We were absolutely delighted with the support from E-Z-GO and the vehicles they provided. They were used extensively around the Sports Park during the event and we were really grateful to have the use of them. They were so easy to operate, could be converted quickly to suit the situation and were very quiet.

"Right from the initial enquiry, the E-Z-GO team has been great to work with and certainly provided a service beyond my expectation."

More information is available at www.textron.com.