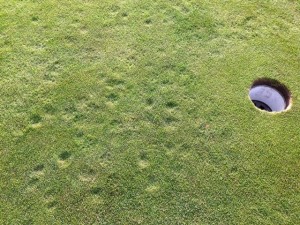 Course Manager Greg Evans and Director of Golf Ricky Willison met up with Adidas Golf. This was to discuss the issue EGC have with the Adidas Zero golf shoe. For those of you who are unaware let us remind you. We first noticed a problem when one of our members reported back that someone was playing golf with football boots on. This was very noticeable on the greens and after some investigation from our Course Manager (mainly through greenkeeping blogs) we found out that there was an issue with certain types of golf shoes. One in particular (The Adizero tour) was receiving several bad reviews.

After much deliberation, we decided to put a ban on these shoes until further notice. We published this on our blog in December (http://egcagronomy.blogspot.co.uk/2013/12/adidas-zeros-are-not-welcome-at-egc.html) and several other clubs followed suit. This has caused quite a stir amongst the golfing community. Normally our blogs receive between 150 to 200 views. With this one we have nearly reached 4000!

During today's meeting, Adidas were very positive and came armed with their new 'improved' model as well as several others. It also became apparent to us just how much technology goes in to making a golf shoe. The days of just sticking 7 or 8 spikes in a shoe have long gone! Now it is all about pressure points and comfort.

They explained that performance from the 'Golfer to the golf green' is their number one priority. The Course Manager tested the new shoes on the 18th green. What he felt is the new cleat (which is softer and at less of an angle) is a lot more green friendly than the old one, but based on today's conditions these were still deemed unacceptable to the greens. We then tested other models (some of which have yet to be released) and these are a lot more friendly to the turf.

So in conclusion we feel that the adizero's, new & old, are still unacceptable for our greens, but we have been assured that as conditions improve this will change. For the time being, the ban continues but will be monitoring the situation closely.

We would like to thank Adidas for taking the time to come and visit us at Ealing and we were delighted to hear that they take this subject very seriously. We would also like to clarify that we have no issue with any other Adidas shoes. In fact, we would like to state that we would take a similar stance with any shoe that is seen to cause damage to our greens, irrespective of make.