0 Eamonn homes in on Kazakhstan 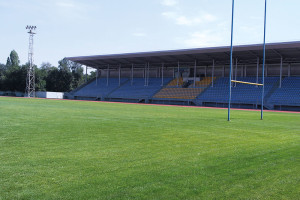 As Grounds and Gardens Manager at one of the UK's leading independent schools, Eamonn Murphy is certainly never bored. His role at Haileybury, a co-educational boarding school in Hertfordshire is varied to say the least.

Eamonn heads up a team of 13 and is responsible for the College's 500 acre estate, which includes gardens, sports pitches and woodland.

The pitches, in particular, are so highly regarded that they have been used by Tottenham Hotspur, as well as the Argentina and USA national rugby teams during Rugby World Cup 2015. But recently Eamonn took on the most unique project of his career so far - helping the Kazakhstan Rugby Federation to transform a former army base pitch into their new rugby pitch.

"Haileybury has a sister school in Almaty, Kazakhstan," explains Eamonn. "Some of the rugby sessions for pupils at Haileybury Almaty were delivered by the captain of the Kazakhstan Rugby Federation. 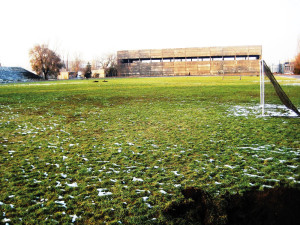 "The Kazakhstan Rugby Federation had heard good things about Haileybury and the quality of our world-class 1st XV rugby pitch.

"With the kind permission of the College's Bursar, I was invited on several occasions to travel to Almaty to assist and consult on the improvement, care and maintenance of their new pitch."

Eamonn first visited Kazakhstan in winter time, when temperatures can drop down to minus 25.

"I landed at Almaty airport at 8.30am following a seven hour flight and found myself in a meeting with the President of the Kazakhstan Rugby Federation less than two hours later!

"I don't speak Russian, so with the help of a translator we talked about what they wanted to achieve and how I could help."

After the meeting, Eamonn went to inspect the pitch, which was located in a former army base near Almaty.

"The soil was very coarse with lots of big stones on it," he recalls. "It was absolutely sopping wet too because it was covered with snow."

Eamonn didn't waste any time getting straight to work. "We started by harrowing the pitch and ruffling it up so that we had a better surface. But there were so many stones that the pitch needed to be completely cleared before any grass seed could be put down. I spent the next few days giving advice and putting together a plan of action, with the help of my translator."

During his trip Eamonn also had the opportunity to see some of the local sights, including the famous Green Bazaar market, and sample some of the delicious Kazakh cuisine.

"Everyone I met was so friendly and welcoming," he says. "The country is a beautiful and fascinating place to visit, and from the pitch you could see snow-capped mountains in the distance. Before I knew, it was time to fly home and return to my day job."

Back in the UK, Eamonn started to compile a report for the Kazakhstan Rugby Federation in both English and Russian, with the help of his colleague Kathryn Walsh who is fluent in the language.

"I had to work out a site specific seed, which was no easy task!" he says. "I needed grass roots that would grow in different directions so they locked. That way, when a rugby player was being tackled, the grass would not sheer away from the surface and it would be anchored by the roots.

"But not only that, I had to make sure it could withstand temperatures of minus 25 in the winter to plus 40 in the summer. You can easily get a grass species that can resist minus 25, but it wouldn't be a suitable grass species for sport." 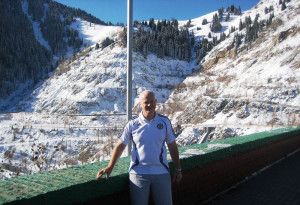 Eamonn spoke to Bob Scott, who works for DLF Trifolium Ltd and has over 30 years in the turf business. Together, they came up with a one-off grass species with different variants in it that would be able to cope with extreme cold, hot weather, drought and flooding.

His next challenge, with Kathryn's assistance, was exporting the grass seed - all 160 kilos of it - over to Kazakhstan. He also sourced and shipped over a Charterhouse Speed Seeder to make sure the seed would be able to germinate properly.

"I believe that was the first time they'd had that particular bit of kit in the country," says Eamonn. "But it was essential to make sure that the pitch would be suitable and ready for the grass seed."

Nine months after his first visit, Eamonn returned to Kazakhstan to see how the project was shaping up. This time it was summer and the temperature was much warmer.

"When I visited the pitch, I could see straight away that there were still too many stones on it," recalls Eamonn. "With the help of all of their first team, we cleared the whole pitch - which unsurprisingly took no time at all!"

Eamonn spent the next three days supervising the seeding of the pitch. This was followed by making sure an irrigation system was in place and setting their fertilisation programme for the year.

Back at home in the UK, Eamonn had already formulised a particular fertiliser that was site specific for the pitch and its extreme environmental conditions.

"I enjoyed having to think outside of the box and calculate the different percentages of nitrogen, potassium and phosphate," he says. "As I left, I was very pleased with how the pitch was looking."

Over the coming months, Eamonn returned to Kazakhstan a few more times to supervise and monitor the pitch. Called the pitch of the Foundation of the First President of the Republic of Kazakhstan - the Leader of Nation, it is now used by the Federation as their rugby pitch.

"It was a once in a lifetime project to work on and it was an honour to have been asked," says Eamonn. "It was challenging at times, especially as I don't speak any Russian, and often had to come up with solutions to problems from thousands of miles away! But it was extremely rewarding and a unique experience."