by Carly Roberts
in Football and People
on 14 Aug 2019

Tony attended the 2019 FA & McDonald's Grassroots Football Awards national ceremony at Wembley Stadium to collect his award after being named winner of the prestigious Grounds Team of the Year award. 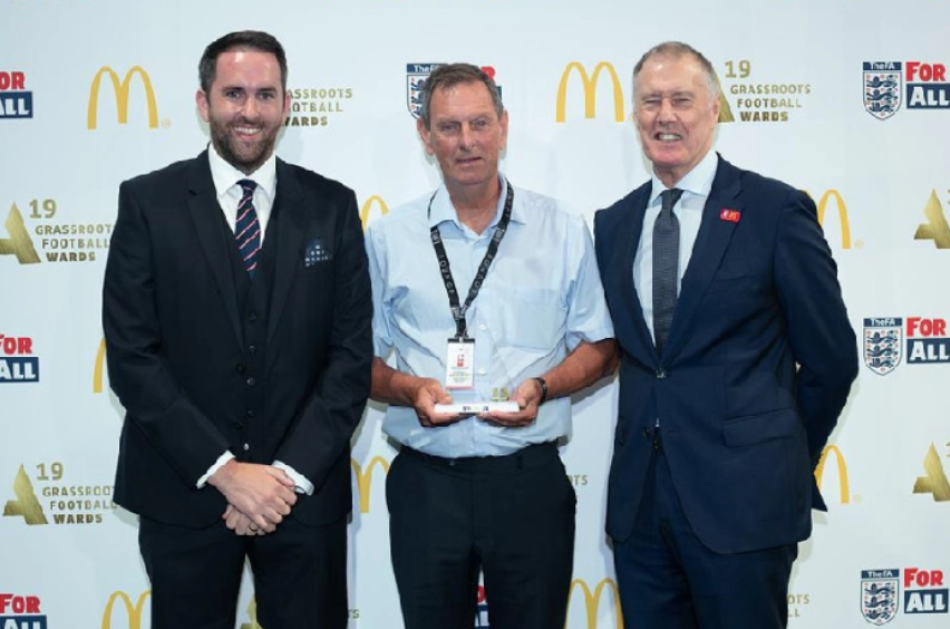 The FA & McDonald's Grassroots Football Awards recognise and celebrate the tireless volunteers who dedicate so much time to the grassroots game. The awards are now in their 10th year and Tony joins a long list of inspirational grassroots football heroes who marched down Wembley way to collect their coveted awards.

Now in his 70s, he has become a pillar of the Earls Barton United community. He is responsible for some of the best prepared pitches at this level of the game, covering two grounds located a mile apart. He supports every one of the club's teams and approaches each job with the same diligence and modesty.

But preparing the pitch only covers a fraction of his impact. From cleaning the changing rooms and putting up and taking down nets, to setting corner flags and welcoming referees or stepping in as a linesman, Tony is the rock on which community clubs like his are built. Impressed judges had no hesitation in selecting him for Grounds Team of the Year 2019.

During the half time break, Tony joined World Cup hat-trick hero Sir Geoff Hurst on the pitch in front of 77,000 fans.

"I have been involved with the Grassroots Awards since the beginning and the stories of the winners never fail to impress me," England legend Hurst said.

"Tony should be extremely proud of his work and grassroots football in Northampton is a much better place with Tony a part of it."

"The English game is in a very good place at the moment with the Three Lions boasting a number of young and talented players, whilst the Lionesses have enjoyed a superb World Cup in France.

"Our national teams simply wouldn't be in this place without the hard work of our grassroots volunteers - every player has to start somewhere. It was a pleasure to meet Tony and I hope he continues his extraordinary commitment to football for many years to come."

You can read the full article from the Northampton Chronicle HERE