0 Ease the the pressures with Charterhouse

Ease the the pressures with Charterhouse 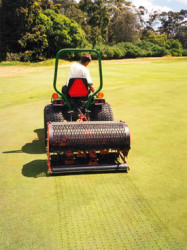 A wide selection from the company's portfolio will be displayed at BTME in Harrogate, running from 18-20 January.

One of the greatest weapons in the greenkeeper's armoury is the Verti-Drain, the world-famous deep aerator. Often copied but never bettered, Verti-Drains drive solid or hollow tines to a maximum depth of 16in (400mm), introducing air into the soil and rejuvenating turf. A unique parallelogram configuration provides 'heave', breaking up compacted ground.

The Verti-Drain range includes machines with a host of different working widths and sizes, to suit all requirements. At BTME, a new hydrostatic ride-on version will be unveiled, which removes the need for a separate tractor.

BTME visitors will be able to see examples from the Charterhouse Verti-Core aerator range. A direct gearbox drive to the cast steel cranks gives unrivalled strength and reliability. Three models are available, with working widths of 52in (1.3m), 68in (1.7m and 84in (2.1m), each with a maximum operating depth of 5in (12cm). Verti-Cores have no drive belts, pulleys or chains, meaning there is less to go wrong.

Also on display will be the Verti-Seed overseeder range. These ensure direct contact with the soil for optimum placement and the best chance of germination. There is a choice of models, offering 46in (1.15m) and 62in (1.55m) working widths, and they both operate at speeds of up to 6mph.

Charterhouse will exhibit their range of Rink top-dressers, including models designed for tractors and popular utility vehicles. These units feature a specially designed, continuous loop guided belt system that delivers the top-dressing to a full brush applicator for even spreading in one pass, even with wet materials. A new 2-tonne version will be launched at the show.

"With so many products for all key maintenance tasks, we're sure to meet every challenge the professional greenkeepers at BTME can throw at us ! " says Managing Director Philip Threadgold.