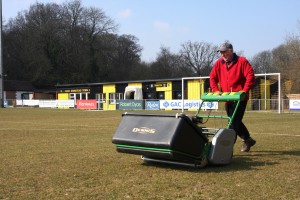 Nicknamed 'The Wasps'; East Grinstead Town FC was formed in 1890 and has always had a strong support from the town's local residents. None more so than Geoff, who used to be a spectator on the terraces. To this day, Geoff can still be seen on match days cheering on the team, but instead of a cup of hot Bovril in his hand he is more likely to be carrying a pitch fork.

"I started off being a spectator here but I got more involved and started helping out around the club. Then five years ago I took on the responsibility of looking after the pitch."

Having been raised in the countryside, Geoff gained a great understanding about agricultural life, especially during the Second World War when he and his family would grow vegetables to supply to local shops. Geoff became a natural with tractors and other groundscare machinery, so when the chance arose to reapply some of those skills he learnt as a child, he claimed he was in his 'element'.

However, at first, Geoff didn't have the best of tools to work with: "The last mower we had here was a bit of a so-and-so and I had to tame it quite often. It was a bit old fashioned to be honest and we were having a job to start it. We actually enquired about getting it fixed but it was decided that it might be better just to buy a new one."

It proved to be the right decision as Geoff landed himself a brand new Dennis G34D. Designed to appeal to sports turf managers and professional gardeners alike, the new Dedicated G-Series range of mowers has been designed and built following the same concept as the popular Dennis G860 machine. Available in three different cutting sizes - 26", 30" and 34" - the mowers incorporate a large-diameter eight-bladed cutting cylinder to cater for a wide range of uses to leave a precision cut. The handlebar design makes manoeuvring the machine easy and comfortable to operate.

East Grinstead chose the 34" cutting width model and Geoff hasn't looked back since:
"We purchased the machine from our local dealer Lister Wilder and one of their managers came along and showed me how to use it. I grasped it very quickly because it's very easy to use. I was instantly impressed. The first thing I thought was how good the balance of the machine was.

"Because of the heavy roller at the front, the mower doesn't bounce around on the surface like our older mower did. With the last machine we had, I had to hold the handles firmly to stop it from bouncing around everywhere. It cuts beautifully, provides an excellent finish and I like the fact it's compact - it's really lightweight and comfortable to operate."