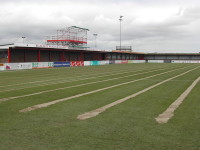 "They were very impressive in operation and incredibily efficient. We now have a stadium pitch, two youth pitches and a training pitch which will give us years of service," he said.

Len is chairman of the largest of the three football clubs in Eastbourne (the only town in the country with that number of league clubs) and was part of the team which masterminded the creation of the present ground on former marshland 25 years ago.

"We had increasing problems with drainage because of the clay underneath," says Len. "Thanks to the work done by Speedcut Contractors, and previous drainage work, we now have two youth pitches - one of which has not been used before - and a new training ground."

Speedcut carried out lateral pipe drainage on one of the youth pitches and sandslitted all the pitches.

On the main stadium pitch they also carried out sandbanding in some areas. 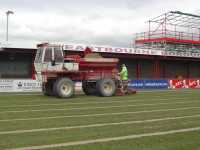 A team of four, under foreman Peter Little, worked at the Eastbourne site for two and a half weeks in May.

After overseeding with BAR7 the main pitch was topdressed with 60 tonnes of specially selected sand.

The pitch has until July 24th to settle in when Eastbourne Borough play the first friendly at home against top-ranking Wykham Wanderers.

"We didn't miss a game last season," says Len, "but we did have problems with a frozen playing surface.

"Now we can have a consistent surface throughout the season and for many to come thanks to all the work that has been done by Speedcut."

Eastbourne Borough FC stadium holds 4,200 spectators, 500 seated, and plans to increase the number of seats by 300 by enlarging the main Mick Green Stand - named after the legendary club captain killed in a car crash, who had played for all three Eastbourne clubs and also played for Sussex County.

Speedcut Contractors also have a golfing link with Eastbourne Borough FC as well because one of the players is Alan Tate, course manager at Nizels Golf and Country Club where Speedcut has carried out major drainage work.

Speedcut contracts manager Kevin Smith said: "We were delighted to work with the team at Eastbourne Borough and are pleased that they are entirely satisfied with the completed works.

"Giving the club playing surfaces that are likely to remain consistent throughout the season is a major advantage for them." 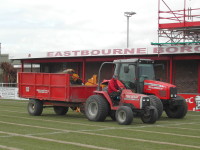 Chairman Len Smith said: "We finished 13th out of 24 teams in the Blue Square Premier League at the end of the last season, which we were delighted with.

"We have just installed new floodlights which will make games much better for everyone, particularly televised matches."

Gate figures showed a 57per cent increase last year and is the best attended football ground in Eastbourne.

Regular pitch maintenance at the ground is carried out by Jason Sarna, who runs his own grounds maintenance company, and club volunteer Robbie Britcher.

The other Eastbourne clubs are Eastbourne Town, in the Isthmian League, and Eastbourne United, in the Sussex County League.

Eastbourne Borough started life as Langney FC (named after the area of Eastbourne the club is in) and was renamed in 2001. They moved to their current home in Priory lane 25 years ago - raising the level of the ground by two feet to overcome flooding when the pitch and stadium were built.

As well as football the club houses an indoor bowls club, archery area, a nursery school and other community facilities.

"We are very much a community club," says Len, who has been been chairman, on and off, for over 40 years, when he and a group of friends founded Langney FC.