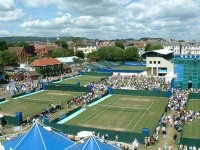 Even with 21 years working experience at Devonshire Park, the home of the Eastbourne Women's International Tennis Championships, the workload never seems to get any easier, with the weather always playing a crucial part in the preparations for the event.

This year the championships are being staged between 11th and 18th June. It is a one week lawn tennis tournament, which always precedes Wimbledon, giving players the opportunity to experience grass court play.Our preparations for the tournament began last September with our normal end of season renovations.

We have 12 grass courts, 6 for competition and 6 for practice. Our courts are very old, dating back to the late1800's, and were formed on some old reclaimed land that has been improved with the addition of sand and soil compositions over the years. The courts are very free draining. Since my time here we have been using Surrey Loams, graded organic sports turf dressing (GOSTD) 18% clay loam for top dressing, building up a decent 150mm topsoil profile.

As soon as our competition season ended in August we stripped down all the courts, removing all canvas, nets and partitions. The courts were heavily scarified, taking out as much debris as possible, in 22 different directions using our Sisis Auto rakes and Vee mowers. We also hired in a Graden and found it to be excellent; we have since ordered our own for this season.

Aeration followed, going as deep as we could, around 100mm, using a verti drain solid tine spiker. About 26 tonnes of Surrey loam was applied, then we overseeded with a Johnsons mix combining three perennial ryegrasses, Sauvignon, Evita and Margarita. Combinations of disc and dimple seeders were used, sowing in several passes at the recommended rates.

Germination was quite rapid as soil and air temperatures were good in September. Once the grass as established we mowed as necessary, maintaining a cutting height of 10mm throughout the winter months. Weather permitting we aerated at least twice per month using verti drain and pedestrian aerators to a depth of up to 225mm and a combination of tine sizes.

The pre-season works starts with an application of spring fertiliser in April using an assortment of Headland products based on the results of the soil analysis. The height of the sward is gradually reduced in 1mm increments until we reach our summer playing height of 7.5mm.

We complement the mowing regimes with verticutting, Mondays and Fridays on a fortnightly basis. This helps keep the sward open and standing up.

We have a fully automated Rainbird pop up irrigation system. It is very useful for when we apply fertilisers and wetting agents, which we use on a monthly basis.

Our first priority of a new season is to get the 6 practice courts up and ready for April 20th when our club members begin to play.

There are various tournaments throughout the year, but the most prestigious is the annual pre-Wimbledon event featuring the world's best women players.

This involves a lot of additional work for the staff. In addition to preparing the courts, we have to oversee and help position cameras, canvas, cables, staging and seating for over 2000 people. We draft in an additional 13 temporary staff to help. Our normal staffing complement is 4, including myself. 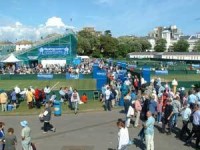 We do not carry out any specific pre season rolling programme, it is all geared to match play. Rolling begins two weeks prior to the tournament, using a 1.5 tonne roller, for up to a total of 10 hours per court. The optimal conditions are when the ground is moist, but not too wet.

The verticutting is continued and mowing is done on a daily basis, with the height reduced to 7.25mm for the tournament. To ensure the courts are not too green and lush our last fertiliser application is at least two weeks before the event begins. We applied a liquid product called Turf Complex (24-0-0), a high N fertiliser with chelated iron and manganese to stimulate colour and growth.

Hover covers are used for the centre court and court number one, and flat sheet covers similar to the ones seen at Wimbledon for the remaining courts. We cannot afford to let the courts get wet leading up to and during the tournament.

Our daily maintenance routine begins at 7 am during the tournament. Covers are removed, we then mow and mark out. It takes about 45 minutes to mow each court, and 15 minutes to mark out. We use dimple wheel-to-wheel transfer markers to produce the 100mm wide base lines and the 50mm tramlines. Nets and posts are finally set up ready for play.

At the end of the day we the strip down the nets and posts and put the covers back on.

Our overall aim is to establish and maintain consistent courts, with precisely the same playing characteristics, for the duration of the tournament.

Once the tournament is over we soak the courts. We wet the topsoil profile to enable us to open them up for repairs, which consists of a very light scarification, a light application of top dressing and overseeding.

All being well the courts will be back in good condition for the next tournament, in three weeks time.