Do you have a problem keeping streets clear of weeds? The problem with non-residual glyphosate based weed control on streets is just that, namely, non-residual. As a result, weeds soon re-germinate and need repeated applications to maintain standards. Typically, most highways budgets only run to two sprays a year in say April and October, and hence the problem. 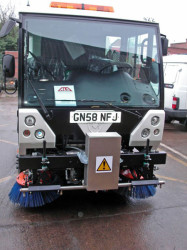 The EasySpray® CDA spraying unit was initially developed by ALS as a means to apply Bayer's CDA Vanquish bioactive glyphosate from a variety of utility vehicles including, and most commonly, road sweepers in all their assorted types. Redditch Borough Council have been using EasySpray® system for several years on a Scarab Merlin sweeper with good results with savings in labour, fuel and carbon. Sweepers circulate regularly so can repeat spray weed re-growth with no added cost other than the material applied.

The concept of low volume CDA application from a vehicle is not new, but in designing the equipment ALS sought to remedy a number of historic problems with similar equipment that affected reliability, effectiveness and long life.

From the very start the EasySpray® units were constructed out of stainless steel rather than painted mild steel. Glyphosate herbicide is a highly corrosive salt, and road vehicles also commonly work in a high salt environment, so every component was designed to cope with this. Every part is stainless, plated or plastic to resist corrosion. The most commonly unreliable part on older systems was always the spinning disc CDA motor head that applied the herbicide in low drift 200+ micron droplets. This has to work day in, day out in extreme conditions of dust, road salt, water and mud spray. Nothing could be worse! So rather than trying to adapt a CDA spray head from a pedestrian hand lance, which normally operates in much more benign conditions, ALS set about custom designing their head to work in all conditions. The motor is mounted in a robust hermetically sealed enclosure with especially good seals that prevent water, dust or chemical reaching its bearings or electrical components. The shaft of the motor is remotely connected to the spinning CDA disc by a nylon drive link, which is flexible. So, when the disc is inevitably bounced off vegetation or even the ground, this bends and flexes rather than bending the steel motor shaft. Finally, one of the main reasons older KSU systems failed was due to operators not washing out the herbicide after use. This can jam the motor shaft or seize up solenoid valves in the system. The answer, designed into the EasySpay KSU, is an automatic washing system pre-programmed to wash the system out automatically as it is turned off at the end of each day. It also then pre-washes through again as the system is turned back on and primed. The process works automatically and is non-optional. That keeps everything clean and working!

Another problem with older designs of KSU is that the spray head is usually mounted in a fixed position on a vehicle. In 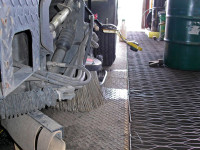 the real world, kerbs and gullies are higher, lower, narrow or wide, some with tarmac adjoining and some with grass or even flower beds. What was needed was a totally flexible spray arm that could be set at any height that suited, at any angle and at varying distances out from the side of the spray vehicle. Users can then adjust this to give accurate application of the herbicide to cover the weeds, but avoid damage in other places. The EasySpray® CDA spray arm has a pivoting break-back mounting that allows exact positioning of the spray head, with height and angle of spray all easily adjusted. It can spray in close or even behind the vehicle or be adjusted out sideways to cover a strip alongside and will pivot out of harm's way if it does hit an obstacle without damage to either. 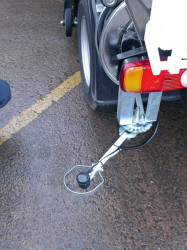 The flexible positioning of this arm and the wide variety of vehicles from sweepers to ATV's that can be adapted means that the system can be used in all sorts of ways.

For example, Redditch Borough Council uses the EasySpray® KSU to just spray the kerb edges and gutters, using a big Scarab Merlin sweeper. They did this initially for health & safety reasons because kerbs had been sprayed by a small Kawasaki Mule, that was very much at risk from large commercial vehicles thundering past. They quickly realised that the regular passes that the sweeper made resulted in much better weed control compared to the twice-yearly original application. In addition, they were no longer paying for the fuel and running costs of that Kawasaki, nor the wages of the man on it, because this was covered by the sweeping, so they also reduced their carbon footprint. In this particular case, the Kawasaki now just sprays the pavement tops and back edges, picking up the corners of kerbs in cul-de-sacs or where parked cars have prevented the sweeper getting at the kerbs. That customer also has an on-foot spray team that spray mowing margins around obstacles, and they too pick up on any misses. The overall team effect has been a big improvement in weed control throughout the borough, with added cost savings.

Other customers have units fitted to compact sweepers such as the Schmidt Swingo 250 or Scarab Minor and might spray along kerbs and back edges of pavements. Because the unit provides two separate width settings for the spray and a variety of arms, the unit can be used as a narrow band spray or up to 1.1 metres across the whole width of a small vehicle to cover a path, for instance. 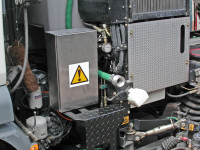 When spraying a kerb edge at say 30cm width one 5 litre pack of Bayer's CDA Vanquish herbicide will spray over 11 kilometres of continuous kerb and gulley. In practice though it treats far more, because the operator only 'spot' sprays where green weed growth is visible. There is no point in wasting a non-residual herbicide on areas clear of weed growth. CDA Vanquish has proved to be the very best of its type, containing Monsanto's 'biactive' glyphosate technology, a full 1800 grams per hectare dose and being the best of all glyphosates from an environmental point of view. This means that even the most hardened and established deep rooted perennial weeds are killed, even in marginal conditions such as under drought stress, cold conditions or when there is rainfall fairly soon after application.

The Easyspray® KSU system has now been proven in use over many years and users continue to benefit from improved weed control standards, labour and fuel savings and even more nowadays, a reduced carbon footprint.