by Editor
in Football and Industry News
on 01 Jan 2016 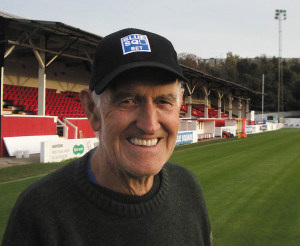 Peter was a familiar face at the club for well over a decade, and celebrated his landmark birthday in October, Sadly, he spent the last few weeks of his life in a hospice.

Social media tributes poured in for the Ebbsfleet legend following his death on 30th December, whilst the club tweeted a tribute on behalf of their vice chairman, Peter Varney. "Cannot put into words how much this news has affected all of us who work for the club," he said.

"He was a true gentleman and 'legend' with a tremendous work ethic," adding: "Stonebridge Road will never be quite the same."

"He was so proud of the team's performances."

Sadly, he was beaten by more than the weather. Our thoughts are with his family, friends and all at Ebbsfleet United.

The club plan to hold a minute's silence to remember Peter before their next home match which is against Truro City on Saturday, 9th January.