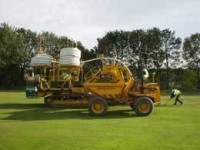 anniversary with the renewal of their outfield drainage system thanks to an ECB pitch upgrade grant. Kirkstall, where England and Yorkshire fast bowler Bill Bowes began his career, 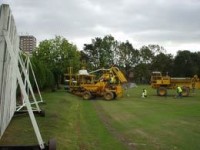 Groundsman David Hodgson said: "Although our square is regarded as one of the best club squares in the area, the ground suffers from a slope from the top end of the outfield. Owing to the poor drainage even minimal amounts of rainwater would run down the slope often leaving the square unplayable or at least extremely difficult to maintain.

"We set ourselves the goal of having the drainage renewed in our 150th year in order to maximise the number of matches we could play over the course of a season."

With three senior and four junior teams, Kirkstall hosts well over 75 matches each summer. The club have ambitious plans for developing the junior sections of the club and the ability to get rid of excess surface water quickly and efficiently became a top priority. This would increase the ability to repair pitches quickly and get as many games as possible out of them. David said: "We are indebted to the ECB for the funding towards this project and to the YCB for making us aware of the pitch upgrade grant and then acting with us as co-ordinators between the ECB, the contractors and ourselves."

Jonathan Smith, the YCB's senior pitch advisor, inspected the ground in early 2003 and prepared a report which stated that sections of the outfield were particularly wet and that the levels of the square made the preparation of good pitches in the summer an impossible task. The ability to keep pitches dry during preparation is vital when a club plays a high number of fixtures on a small square. He went on to recommend that a new drainage system be installed to include a ring drain around the square linked to an outfield drainage system. 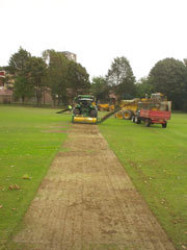 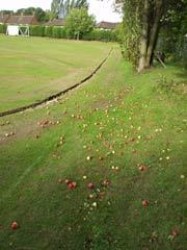 A laser controlled trenching machine cut a perimeter drain around the outfield to a depth of 800mm into which a 100mm piping was laid. This was linked to a 150mm outlet pipe to discharge the water into an adjacent dyke by way of an outfall head wall.

The perimeter drain was then backfilled with a 6 to 10mm washed gravel to 250mm of the surface and then brought level with a root zone with an 85 per cent sand and 15 per cent soil mix. Lateral drains were installed across the outfield at 6m intervals and a rung drain was laid around the square. A saddle was also taken off at the bottom end of the square with a Koro soil plane to allow water to flow more freely from the playing area.

David said: "We had a massive drainage problem on the outfield and I couldn't keep pitches dry because there was water coming across the square caused by the slope. We put in an application to the YCB for their pitches upgrade scheme. Jonathan Smith did a grounds inspection. He identified the problem as being water running across the square and he recommended we get in drainage contractors.

White Horse completed the job in ten days. We are reaping tremendous benefits from that. We have been able to play games we would not have been able to play. We have had a lot of wet Thursdays and Fridays but we have still been able to play at the weekend. We had saddles on the pitch and so water would come down the ground and settle in the saddles. So, we had the saddles taken out. It has been a super job and it has made a difference. The drainage work provided an impetus to improve the outfield and we did a lot of slitting and spiking work and we killed the moss and fertilised."

David is a busy man, looking after three clubs in north Leeds - Kirkstall, Alwoodley and North Leeds, all in the Aire-Wharfe league. He also looks after a pitch at Adel -also in north Leeds - where Kirkstall's fourth team play in the Dales Council League. 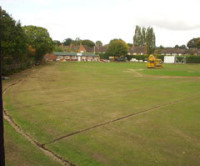 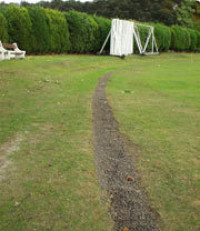 I have worked on the square by doing the basic work of rolling, scarifying, over seeding and top dressing with Boughton County loam in the autumn, keeping it clean and keeping it in good repair and doing all the basic things. I like Boughton county loam - it is easy to grow grass and it produces reasonably fast, bouncy pitches. For club levels of cricket it is a good loam. It is a good loam for part-time Groundsmen to use.

The machinery we use includes a Sisis auto rotorake scarifyer, a Groundsman 345 spiking machine with various tines and various mowing machines. All three clubs own pitch cutting machines. We have a two ton roller and a Ransomes auto certes machine for cutting pitches because this machinery is quick and easy to adjust. That is important when I have three grounds to look after.

We are applying to the ECB Community Club Development fund for a grass practice area. I re-laid the square at Alwoodley in the early 1990s. I used a turf cutter to cut out the thatch and then re-laid the square with new loam. We were short of cash and Keith Boyce was relaying one of the Test pitches and so I acquired soil from Headingley for our square. I took off the turf at Alwoodley and re-instated it with new loam, which I had cut from the Test pitch at Headingley and shredded to put on my pitch."