Groundsman will receive greater assistance in producing better quality pitches - seen as essential to the health of T20 in particular - by a new team of cricket liaison officers next season. 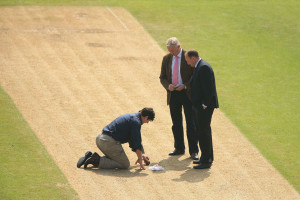 The new four-man team, who will also assist umpires, replaces the old structure of pitch liaison officers and umpire coaches and will be attendance for all four days of a County Championship match. As a result, there will be slightly more responsibility on umpires in assessing a pitch.

The panel comprises Tony Pigott, a former pitch liaison officer, Phil Whitticase, who was sacked as Leicester director of cricket at the end of last season, Graham Cowdrey, returning to cricket after a career in finance following 14 seasons playing for Kent, and Stuart Cummings - who ran the match official departments for the Rugby Football League.

"The idea is to get someone at every match," Chris Kelly, the ECB umpires manager, said. "We'll keep them working as much as possible and the intention is to to have four appointments per round. The umpires will mark all pitches as they see it but if there was a concern we would still have the flexibility to move the guys on the panel around to cover any incident.

"The CLOs will be there to support all stakeholders including the groundsmen and the umpires, and having them there for all four days of a County Championship match will allow us to receive more detailed and live information back from the grounds."

The process, on the face of it more supportive, replaces a system in which pitch inspectors would rush to grounds at the first sign of a fall of wickets to decide whether points deductions should be levied.

"The PLOs might have been viewed a bit like policemen - they'd be appointed to a day of a Championship game or turn up at a ground if something was going wrong," Kelly said. "We see our CLOs building positive relationships with the groundsmen, as well as the umpires and other key figures at the match - relieving some of the anxiety from what was there before.

"We're in this for the long haul, and at some time in the future we expect to see us able to cover every first team county fixture in all competitions."