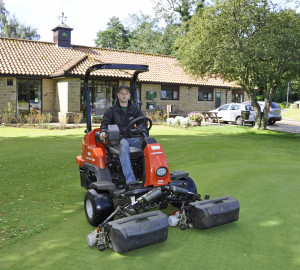 Andrew Percival, greenkeeper at Masham Golf Club in north Yorkshire, is yet another convert to the advanced technology of Jacobsen's Eclipse 322 ride-on mower. The club, which was established in 1895, purchased the hybrid version of the Eclipse 322 early in 2012 from their local Ransomes Jacobsen dealer, Golf and Turf Machinery (GTM), based just down the A1(M) in Wakefield.

The 9-hole parkland course at the club, occupying land rented from the Swinton Estate, is bisected by the River Burn and is a hidden gem in the heart of Wensleydale. It features six natural 'push up' greens and three built to USGA specification and drains well due to its location on an old river bed.

"We had a series of demonstrations in 2011 and I was particularly impressed with the way it followed the contours on our greens; much better than our existing machine," said Andrew. "With a frequency of cut set at 2mm we immediately increased the speed of the greens by over 300mm to have them stimping at 9.2.

"We've also increased the height of cut from 4mm to 5mm and increased the green speed, which I think is a huge benefit. It might not sound much, but that's 25% more leaf on the plant. Also, the technology in the Eclipse is a real leap forward; no hydraulics is a real bonus, but probably the biggest advantage after the ability to change the frequency of cut, is the fuel economy. We fill it up every 10 days in the peak growing season; we tested it and in 21 hours we used 20 litres of fuel."

Andrew is one of two greenkeepers who maintain the course at Masham; previously a self-employed gardener, he joined the club in June 1998. He gained his NVQ level 2 qualification at Askham Bryan College and has subsequently progressed to Level 3.

Image: Head greenkeeper Andrew Percival has been able to increase the height of cut and increase green speed at Masham Golf Club