On time, on budget finish for six man crew provided by synthetic bunker face specialist is launchpad for more work as a contractor. 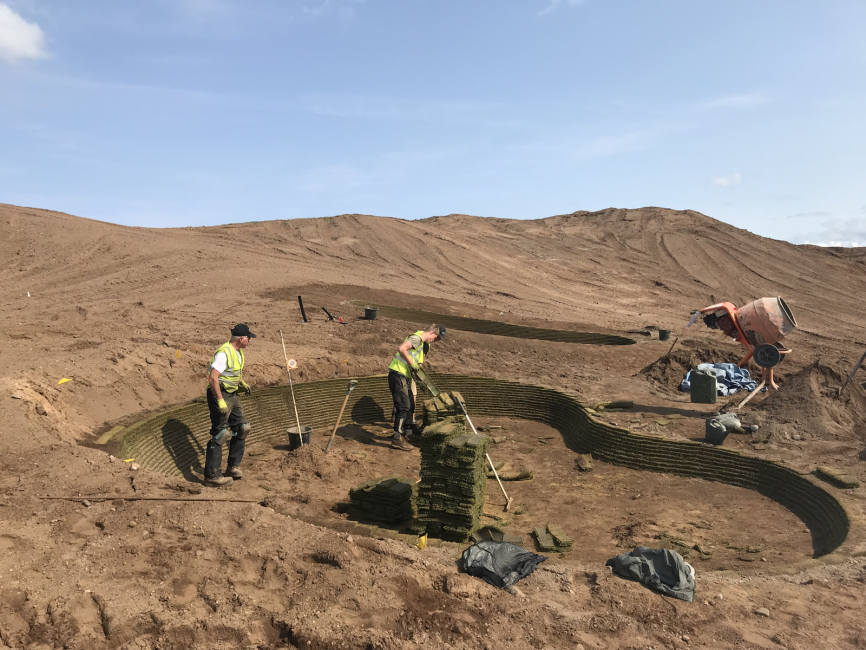 Drumeldrie, Scotland, 31 October 2018 - With the construction of the new Dumbarnie Links course at Drumeldrie on the south coast of Fife in Scotland wrapping-up overall, the golfing world is buzzing about this exciting new links course. Approximately half of the bunkers at Dumbarnie Links are revetted, and bunker building specialist EcoBunker has completed the construction of the seventy revetted bunkers planned for the course, by the planned deadline of the end of October.

The EcoBunker team, led by Global Construction Specialist Llewellyn Matthews (like course designer Clive Clark a former Walker Cup player) began work in June, only a few weeks after the course construction began. Their challenge was to construct the seventy pot bunkers (1,028 sq m of revetted face) over a sixteen week contract period, while staying ahead of and avoiding conflict with all the other active contractors on the site. Matthews and his team helped to plan the programme of works and moved onto each hole as soon as it had been rough shaped, and constructed the bunkers in the native sand.

Matthews said: "This was a fantastic project for us. Although we have been involved in some substantial bunker construction jobs before - 53 bunkers in 14 weeks at the Secession club in South Carolina, for example - this was our largest contracting job to date. I am very proud that we finished on time, to the exact day, and within our construction budget. It was a massive opportunity to train staff, several of whom will now join EcoBunker and become installers in their own right, increasing our capacity to take on jobs of this kind in future. We've delivered the extremely high quality finish that course manager Grahame Taylor demanded, and we have generated good employment opportunities for local people in the Leven area, which has high unemployment." (Taylor was hired by Dumbarnie Links from the Old Course at St Andrews, and is used to seeing workmanship at the very highest level). 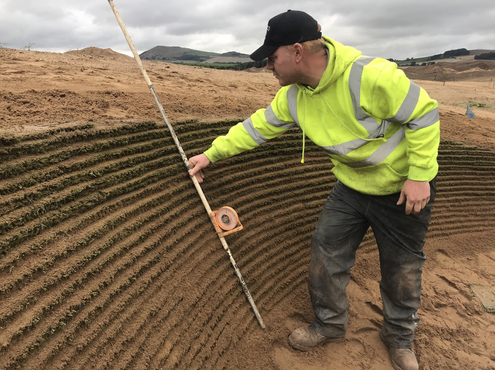 EcoBunker CEO and inventor Richard Allen said: "We were very flattered that Landscapes Unlimited, the golf course contractor at Dumbarnie Links, did not consider any other company to build the bunkers. They knew that quality and the resources to deliver a large project on time were the most important factors. They wanted EcoBunker, and we are all very proud to have repaid that trust. We learned a lot - how to cooperate as part of a much larger team on site and remain totally committed to delivering our bunker scope at the highest levels, while needing to work with several other subcontractors in the best interest of the project overall. We could not be any more pleased with the way the project turned out."

Allen continued: "We have been gradually building our delivery team over the past three years, selectively taking on the role of contractor on increasingly complex projects. Dumbarnie Links takes us to a new level, and we will be seeking to undertake similar scale projects as both a sub-contractor and sometimes the principal contractor for bunker and lake edge construction projects."

Dumbarnie Links promises to be Scotland's most exciting new golf course project in a very long time. The property is part of a pristine 5,000 acre estate, that was available to select the best true links land possible for this project. World-renowned architect Clive Clark has designed a masterpiece that takes advantage of the beautiful natural topography. There are stunning ocean views on every single hole (which is VERY rare), and Dumbarnie promises to challenge golfers of all skill levels while they enjoy the beautiful and sprawling layout.

Llewellyn Matthews concluded: "To watch raw employees grow, develop and take huge pride in the quality of their work and what they achieved working in the team I was responsible for was moving for me. Also building strong relationships with some of the leading players in worldwide golf course construction, and making strong bonds with them that I feel will last a lifetime gives me a great sense of achievement. It was a challenging task and we are so proud to have justified the faith that contractor Landscapes Unlimited, architect Clive Clark, project managers Paul Kimber and Niall Glenn and all at management company OB Sports put in us."