by External source
in Football, General Interest, and People
on 09 Jan 2019

Countless hours of voluntary work and a passion for making the Edgar Street pitch the perfect playing surface has led to head groundsman Ben Bowen receiving another accolade for his work. 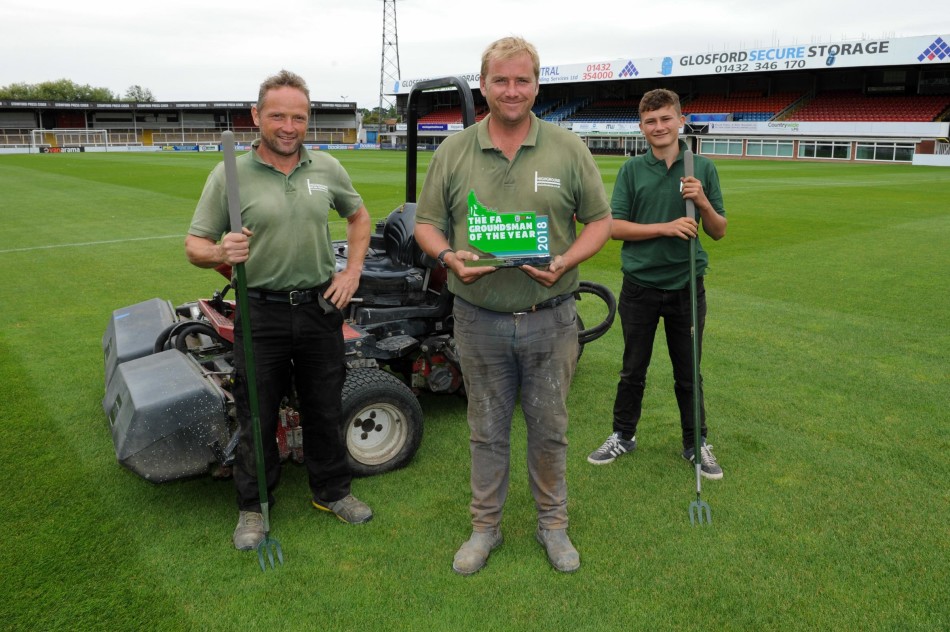 His 'dedication and hard work' saw Bowen and his Highground Maintenance team clinch third place in the Southern League Groundsman of the Year award last week.

The last 12 months has seen the pitch covered deep in snow, subject to a deluge of rain and starved of natural water during the summer months.

Despite this all of the club's Southern league fixtures were played on their original planned dates last season.

However, it was the televised FA Cup home tie against Fleetwood Town which had St George's Park talking during the presentation day.

"If they knew Herefordians they would know that if ever something major comes about we all chip in," said Bowen who attended the awards alongside Ben Millward and Morgan Lewis.

"Every game there is pressure as every game is huge and everything evolves around the pitch. If we can't get the game on everything else suffers including the revenue.

"But the Fleetwood match was panic stations on the Monday morning and I knew how big that game was for the club and the big revenue involved. "I was quite speechless by the number of volunteers when I got to Edgar Street I just thought 'how have we done this?"

Bowen arrives on a matchday at 6am to mow the pitch and volunteers at the ground until 7pm at night in addition to his contracted work for the club.

The Edgar Street pitch is mowed three or four times a week and fertilised.

"I'm called head groundsman but have a team of boys behind me and the force of volunteers," added Bowen.

"Throughout the match I watch the ball the whole game and keep a diary so on Monday morning I know what to do.

"I might need to cut the grass shorter or see an area that needs more watering. I have brought that down with me from league one and two and treat the pitch as that standard.

"I know what the Edgar Street pitch can do and how she can alter. At the moment it's not right in my eyes with the drainage lines which is down to the weather and come October it will be a totally different pitch.

"When it goes right I can just sit back and monitor it but when the pitch goes wrong I can be a grumpy bugger and one slight bobble can do my head in."

Bowen's nephew is Hull City midfielder Jarrod Bowen and the groundsman feels he wants to help the club in return for the help they gave him.

"I personally want to stick my head on the line for manager Pete Beadle because of what he did for Jarrod as he didn't have to," added Bowen.

For the original article visit: www.herefordtimes.com