0 Edgbaston Stadium - Just here to keep the lights on!

The previous twelve months have proved difficult for the turfcare industry. In this article, Gary Barwell, Head of Sports Turf and Grounds at the Edgbaston Stadium tells Jane Carley that, despite the considerable challenges, there were positives to take out of the situation. 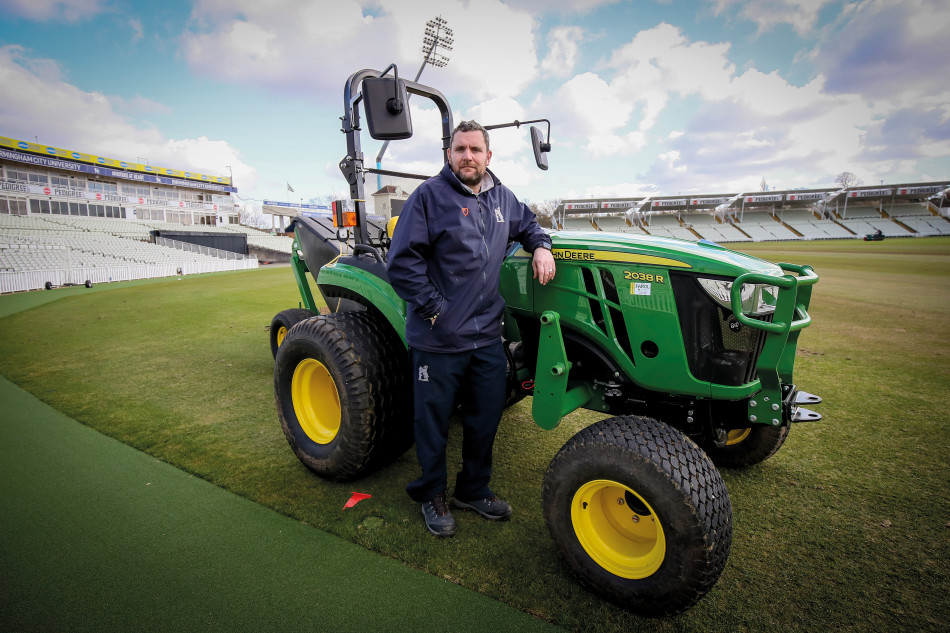 The chance to reflect and consider other ways of doing the job has been one upside of the past twelve months and, at Edgbaston Stadium, home to the Warwickshire County Cricket Club, T20 side Birmingham Bears, Test Matches and One Day Internationals, plus T20 Finals Day, it has also seen a significant change to groundcare regimes.

Head of Sports Turf and Grounds Gary Barwell comments: "We've taken the opportunity to look at the benefits of bringing renovation and maintenance back in-house, with investment in a fleet of specialist machinery giving us the flexibility to work 'little and often'."

This approach has already reaped benefits since the delayed end to the 2020 season meant that renovations could not be started until the end of October. The square was renovated, although in the cold stadium environment, uptake was reduced.

Then, picking the best of the weather this spring, the Edgbaston team hollow cored, reseeded and fertilised the outfield in early March, ready for the rain and warmer temperatures needed to get the seed away.

Gary had plenty of 'headspace' - although not necessarily hours in the day - for consideration last year.

"Once it became clear that the season would be suspended, all of the staff were furloughed with immediate effect," he recalls. "I was on my own for eight weeks, just doing the job that I love, and it was a bit of a novelty to start with. With no fixtures to prepare for, I was cutting grass so we would be ready to go when the time was right - just 'here to keep the lights on'."

He comments that communication with the management via Sport Director Paul Farbrace was excellent and, once confirmation came through that the players would be back in three weeks, Deputy Head Groundsman Mark Johnson returned, and gradually the rest of the eight-strong team followed. 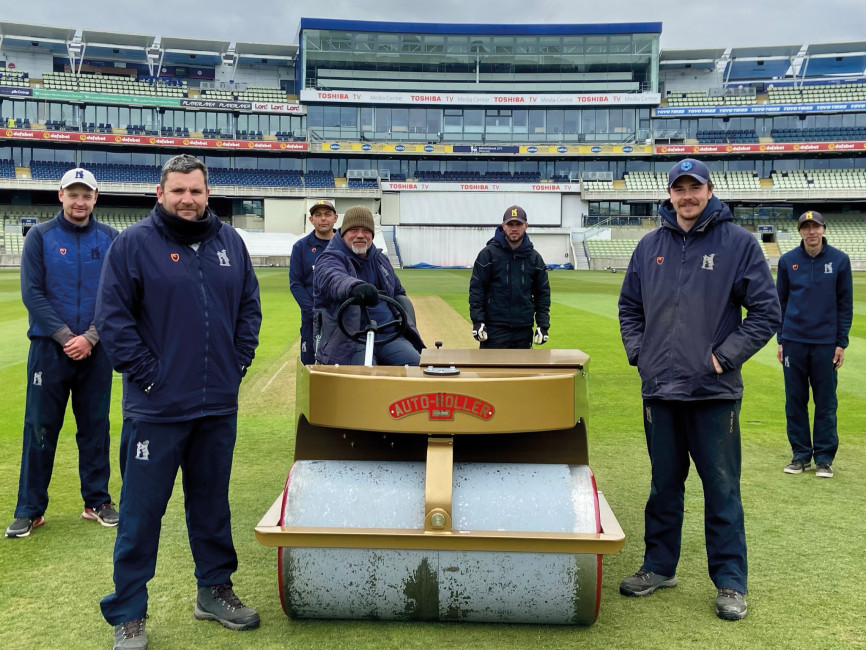 "Although the fixtures were a moveable feast, I'm proud of what we achieved, especially when you consider the deluge ahead of T20 finals (in October). It was amazing that we got it on and that it played so well," he says.

This season is largely business as usual with the addition of The Hundred, and players were back training by mid-March, taking advantage of the nets at the training ground adjacent to the stadium.

Gary and his team will be able to use windows in the schedule and work with the elements to keep the pitches performing throughout due to the investment in machinery.

"Although we renovate the square ourselves, we'd always used contractors Fineturf for major works and the outfield and we got on with them well, but I wanted to explore what we would gain from having our own equipment," he explains. "It was a big step and I needed to have the management on side. The difficulty that many grounds managers have is that they will simply say: 'I need this machine because it does X and Y'."

Instead, he worked alongside the Edgbaston finance team's Abraham Khan to look at the options and how they stacked up against using contractors.

"We considered leasing or purchasing machinery, and the latter was preferred as it gives the business an asset. Abraham calculated that, by having our own machinery, we could save £2000 a year." 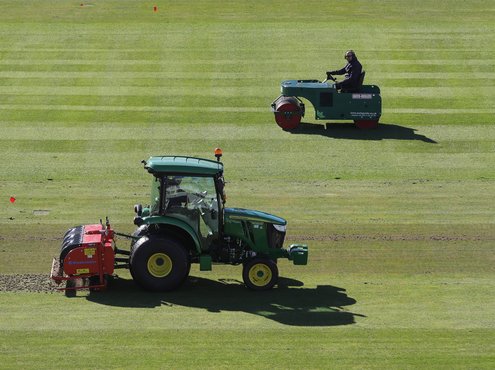 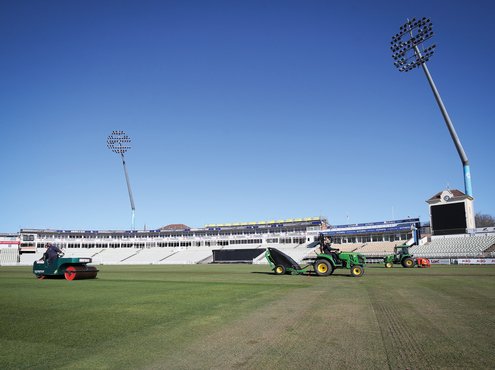 Mike Wheeler at local dealer Farol was key in helping seal the deal by advising on the right mix of machines, which includes some sixteen items of equipment from tractors to a scarifier (see what's in the shed for a full list).

"I just wanted us to be more self-sufficient," Gary explains. "For example, if we had a contractor booked in to overseed and it rained, we'd have to go with the time we'd booked. Now, we can swap the jobs around and do it in the best conditions."

"It also means we can try new approaches; previously, we'd go round the square with a Blotter if it had rained heavily, but why not try out the Pro Core to take advantage of the rain?"

There's also plenty of capacity to get jobs done in a timely way and to make better use of materials.

"We've got 1.5ha of land at the stadium and another 1.5ha at our second ground, the Edgbaston Foundation Sports Ground, so why not purchase the fertiliser to do both at the same time and get a better price? The second ground had not been aerated for four years but, because we've got our own aerator, we've been able to do it twice in two months." 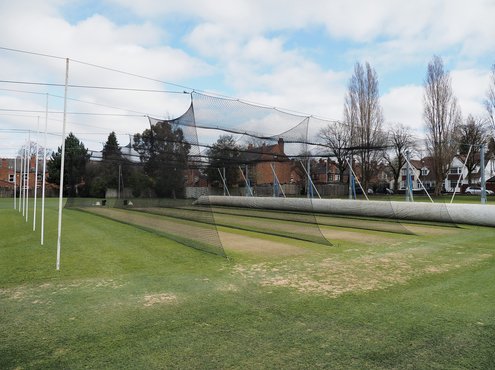 Recent investment includes new nets on the training ground, which is maintained to the same standards as the stadium adjacent to it

He comments that the grounds team have 'taken ownership' of the kit and are committed to using and looking after it well.

"Ash Hill came from a golf club background so he was familiar with some of the more specialist equipment already, and Farol and the manufacturers have been brilliant with training."

Equipment is shared between the stadium and training ground and the Edgbaston Foundation Sports Ground. The aim, he comments, is to get the same standards on the square at the training ground, which has benefitted from new nets this year, as in the stadium.

Gary considers that the relationships within the team are a key part of his role, and staff welfare has been paramount during lockdown and as groundsmen return to work.

"We did regular Zoom calls when the team were furloughed and have a What's App group, and it wasn't just about work, banter is important too," he says. "Most of us have partners or families, but one lad was living on his own in a house share, so we encouraged him to go back to his family."

"We normally have a decent amount of holiday in winter, so the second lockdown wasn't so bad for those who were then put on flexi-furlough, but I've worked through."

He aims to stagger the workload so that everyone gets a good work/life balance and lieu days can be taken fairly. 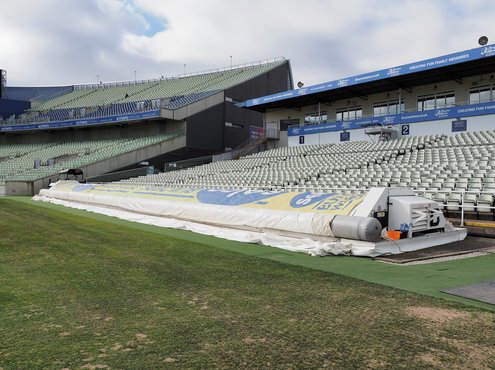 "When getting ready for practice for example, I only need two groundsmen to come in on each day of the weekend to take the sheets on and off. Mark Johnson has responsibility for the training ground, so I'd rather have him all week and let him have the weekend off. It's a long season, from 15th March, when training starts, to 20th September."

If the easing of restrictions progresses as planned, a sense of normality could return this summer, with spectators a possibility for the Test Match in July.

"It's important to remember that precautions are still needed, however. We keep to 2m apart, check temperatures and the lads know not to come in if they feel unwell at all. It's not difficult due to the nature of the work, but we obviously can't afford to have an outbreak," comments Gary.

As well as preparing for the new season, the team at Edgbaston are looking to 2022, and the Commonwealth Games.

Demand for facilities means that the Edgbaston Foundation Sports Ground will play an important role.

The former Mitchells & Butlers ground, a couple of miles from the main stadium, was purchased in 2012, having been saved from development but fallen into disrepair.

"I've got a team of two groundsmen based there who have produced some really good pitches. It's the home of Warwickshire's second team but, in 2022, it will be needed more, especially for training, so we are currently investing in nets and new pitches there."

New Astroturf pitches at the ground are being developed in conjunction with TGMS and main contractor Fineturf, with Gary as project manager.

"I've really enjoyed it, and it was something else to think about whilst the rest of the team were on furlough. We've got such a lot to look forward to." 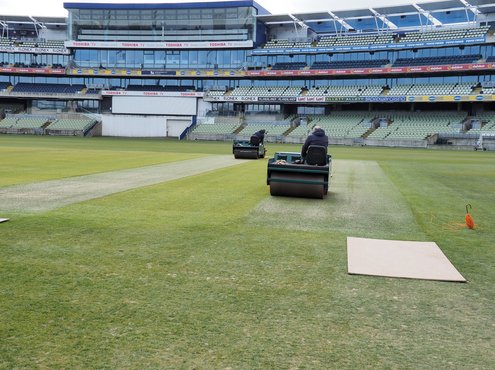 Natural and hybrid wickets side by side - little visual difference, maintenance the same, but extended wear from the SISGrass strip / The Astroturf strip around the outfield has provided considerable benefits, not least safety

A role for synthetic materials

Along with near neighbour and friendly rival Worcestershire CCC, Edgbaston has been trialling hybrid pitches since 2016.

"I looked at various systems used in football and got some really useful advice from Alan Ferguson when he was at St George's Park," explains Gary. "We decided to trial SISGrass, which is a yarn stitched in 9cm below the surface, and a year later met with the ECB to discuss our findings."

Installed on wickets 15 and 17, the hybrid grass is virtually indiscernible from a fully natural wicket. The surface is ready for play six weeks after installation and match preparation takes slightly longer - up to a day more, he reckons.

"They look good. We've used them for all levels of cricket and, once the teams work out the effect on the ball, there is no difference in how they play. There is much less wear - you just can't see the white marks from the ball," he comments.

Gary says that, whilst the technique won't make a bad wicket good, or a good wicket better, if they are prepared to a high standard, hybrid wickets will last longer.

Three more hybrid wickets are due to be added in the stadium this year, while of the thirty-two net strips in the training ground, twelve are hybrid.

Another addition is an Astroturf strip around the edge of the outfield, suitable for running during training, but also to make the use of advertising boards easier and safer. Gary comments that the synthetic material also withstands run off from washing stadium seating and rain better. 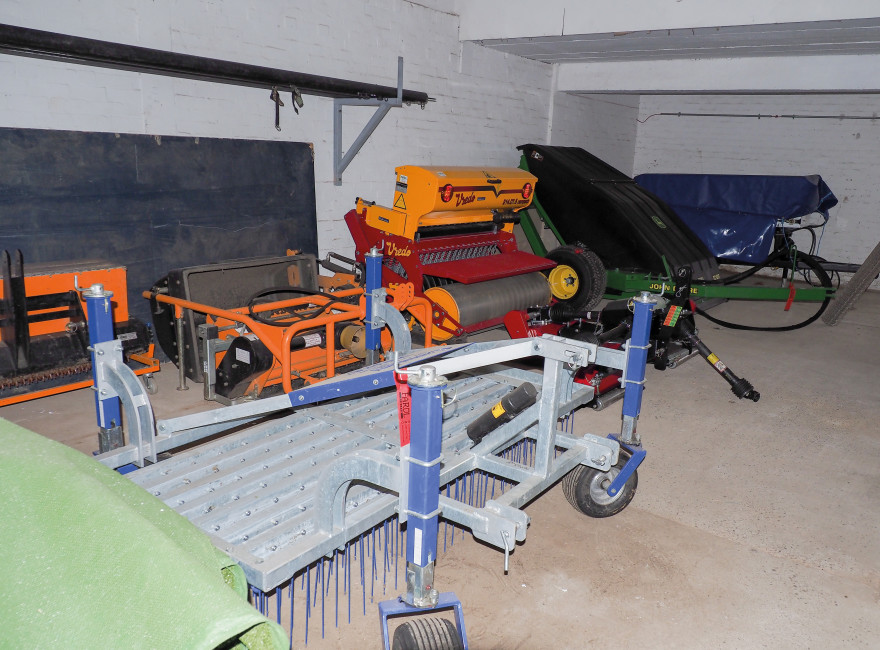 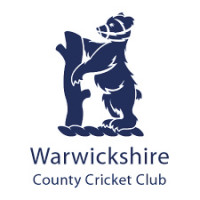