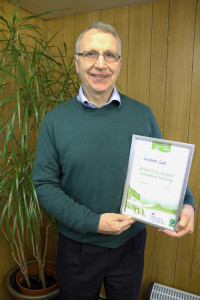 Pitchcare are pleased to announce that our Editor, Laurence Gale, has become a judge of the Green Flag Award® Scheme

Following a two day course at Kings Heath Park, Birmingham, Laurence Gale MSc has been accepted as a judge on the scheme.

The first awards were given in 1997 and now, many years later, it continues to provide the high level of quality against which our parks and green spaces are measured. It is also seen as a way of encouraging others to achieve high environmental standards, setting a benchmark of excellence in recreational green areas.

Furthermore, winning a Green Flag Award® can generate excellent publicity for a site. Both the media and the public are becoming increasingly aware that a site flying a Green Flag is the mark of a high quality green space, which can only be a boost to its popularity.

Commenting on his acceptance Laurence said; "It was a remarkable coincidence that my training was held at Kings Heath Park, Birmingham, the very park where I began my career as a Parks Apprentice with Birmingham City Council in 1972. I'm very much looking forward to getting started in April this year." 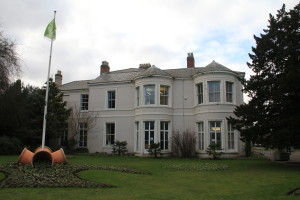 "We realise that all green spaces are different and this diversity is welcomed, with each site being judged on its own merits and suitability to the community it serves."

Since its launch, the Green Flag Award® scheme has gone from strength to strength, with the number of applicants increasing every year. In 2015, a record number of awards were made, with over 1500 parks and green spaces receiving the accolade."

Parks and green spaces are judged in April and May each year, with the winners announced in July. Parks must apply each year to keep their Green Flag Award, and winning sites are eligible to fly a Green Flag in the park for a year.