This article appeared in Pitchcare Magazine

This sounds too good to be true, but it is possible to convert playing surfaces from predominantly poa annua to predominantly fine grasses without stressing the grass - the solution lies in the life in the rootzone.

Why do different grass species colonise your rootzone?

Natural plant species progression has evolved so that bare ground is colonised first by annual seeding grasses, like poa annua and tap rooted weeds, and then progresses through early perennial grasses to fine grasses such as fescue and agrostis. In certain climates, with grazing animals or grass mowers, nature stops there, but plant species progression continues through shrubs to deciduous trees and, eventually, coniferous forest.

Nutrition for plant growth is driven by soil biology, it is the life underground that makes nutrients available for growth. As the nutrient requirements for plant species above ground changes so does the microbial life underground.

Most perennial grasses release about 50% of the energy they produce above ground in the stem and leaves to feed the above ground food chain. They also release about 50% underground by leaking proteins and carbohydrates as root exudates, roots and thatch. This energy feeds the underground food chain of bacteria, fungi, protozoa, nematodes, arthropods and worms, this chain is known as the soil food web .

Simply put, bacteria eat the proteins sugars and carbohydrates that leak from the roots, fungi eat the root exudates, but most live on the cellulose and lignin found in dead organic matter, or thatch. The bacteria and fungi get eaten by nematodes and protozoa which excrete ammonium, bacteria converts the ammonium to nitrate in the presence of oxygen and the cycle of growth and decay continues ad infinitum.

In addition to the microbes in the soil there is another very important group of fungi that live inside the roots of the grass. These fungi are called mycorrhizae, which means fungus root. Mycorrhizal fungi colonise the root system and form a marvellous beneficial association with most perennial plants. Mycorrhizal fungi extend their hyphae into the soil, produce enzymes that make phosphate and other nutrients available then transfer the nutrients, trace elements and water in available form to the grass plant, extending the effective root area many times.

The massive increase in the efficiency of mycorrhizal grass and its root system means it can grow at double the rate of grass relying on fertiliser alone, which is why most new pitch and golf course grow ins now specify that the new rootzone must be inoculated with mycorrhizal fungi.

This activity goes on all the time in unfertilised grasses, which explains why you never have to feed the rough on a golf course, and it is nearly always made up of perennial grasses.

Bare soil is quite sterile as there is no thatch to feed fungi, and bacterial levels are quite low, so the plants that colonise bare soil have growth mechanisms that rely on the limited bacteria in the soil, not an active soil food web because it is not there. Poa annua puts most of its energy into producing seed and relatively little goes underground to feed the supportive food chain (which is why poa annua needs more fertiliser than other grasses). 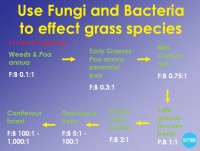 As an annual plant it is designed to seed and die. When it does, thatch is formed and this is food for fungi and a more complex soil food web can now form that supports perennial grasses.

Poa annua does not associate so readily with mycorrhizal fungi so, in addition to its own less developed root system, it also lacks the extended nutrient gathering system provided by mycorrhizae that is so beneficial to perennial plants.

The answer is that, traditionally, sports turf soil is specified and managed in such a way that it becomes almost sterile, just like the soils designed to be colonised by weeds and poa annua.

There are a number of reasons for these sterile conditions.

Microbes eat carbohydrates and proteins but inorganic fertilisers are mineral salts. Ammonium sulphate has a salt index of about 70, ferrous sulphate about 72. This means that, for every 100kg of fertiliser you apply, about 70kg are mineral salts. No living cell can survive on a diet of salt, the plant and surrounding microbes suffer from osmotic shock - water is taken out of the cell.

The plant and soil needs more water, which removes the spaces for oxygen, anaerobic conditions build up and fungi die, while bacteria start to metabolise anearobically reducing ammonium and sulphate to toxic ammonia and sulphide.

As the fungi die thatch starts to build up which, in turn, holds more water, and a vicious cycle begins. Natural thatch degradation is extremely important for healthy turf. When thatch degrades it produces humus, humic and fulvic acids which, apart from being essential plant foods, ensure a slightly acidic pH which is what fungi need to survive. You do not have to chemically create acid conditions, fescue is the indigenous grass of most chalk downlands.
When poa annua goes yellow on an irrigated green in summer it is actually dying. It has lost the ability to support itself, the only answer in sterile soil is to provide more nitrogen, a short term solution which adds to a long term problem.

Until you get the correct soil biology for fine grass, any physical or chemical remedy for poa annua control will be continuing and costly. Get the right soil biology and poa annua will convert by itself to perennial poa and, eventually, rye, fescue or bent depending upon overseeding, indigenous grass species and your management practices.

1. You must build a good beneficial fungal population in your thatch layer and soil. Thatch is fungal food and degrades to produce plant food. You can add fungal inoculants or grow your own with fungal dominant compost tea. Once thatch starts to degrade you can release nutrient for grass growth by light aeration with a sorrel roller or micro tines.

2. Make sure your root systems are colonised with mycorrhizae, these fungi favour perennial poa species and fine grasses, they will ensure more rapid development when overseeding or germination of the existing dormant seed bed. Mycorrhizae are available as a SeedCoat, in MycoGro Complete fertilisers and for new builds as Mycorrhizal Inoculant which contains all the basic components of the soil food web to activate sterile soil.

3. Get the soil chemistry right, balance the ratio of calcium, potassium and magnesium for optimum nutrient uptake to prevent unnecessary application of inorganic nitrogen.

4. Fertilise only as required, aerate with a sorrel roller first; only if this does not kick start growth, feed lightly with humic acids or seaweed to feed fungi. There is no hard and fast rule as to the amount of N and K required, but increasing cation exchange capacity will reduce fertiliser inputs and speed the conversion process especially on USGA specification rootzones.

5. Do not apply phosphate. 10 ppm of available phosphate is more than enough phosphate for the mycorrhizae to solubilise and make available to the plant for healthy growth.

6. Overseeding, if done properly, does speed up the conversion rate, especially if you have a thin sward or almost no fine grasses.

7. Do not let the poa annua starve in the winter. In spring time poa annua starts to grow later than perennial grasses because it does not have their microbial support system to access nutrient. In early spring poa annua has to feed off its own store of nutrient. If it has no available nutrient it will start to grow much later than fine grasses. Judicious fertiliser application in late autumn or during warm periods in the winter will provide a nutrient store for poa annua to grow in spring. More importantly, it will reduce the need for heavy applications of inorganic fertiliser in spring, reducing the total annual input of high salt fertilisers.

8. Analyse your soil for microbial activity, we can now measure total and active fungi and bacteria, protozoa and nematodes to take the guesswork out of soil management and reduce your costs to the minimum needed to promote healthy perennial grass.

Follow the above guidelines and you will start to see fine grasses colonise your sward in a surprisingly short time, saving on water, fertiliser, disease and dry patch management.