by John Handley
in Chemicals & Fertilisers
on 10 Mar 2017

0 Efficient use of nitrogen in turfgrass management 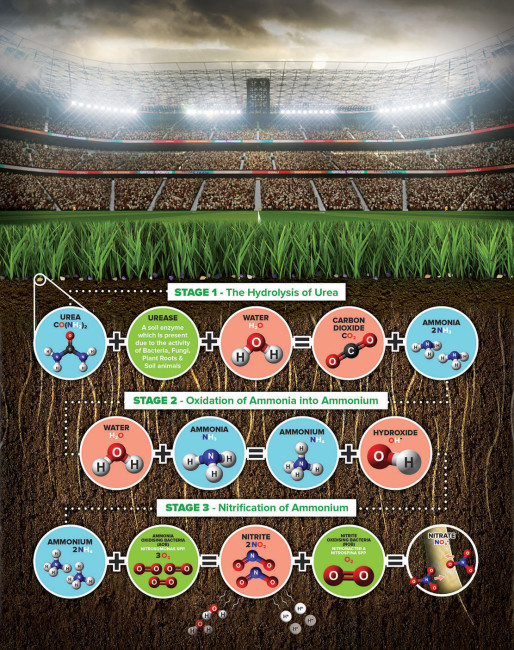 Nitrogen is quantitatively the most important mineral nutrient required by turfgrasses; as a structural and functional component of the 20 protein amino acids, numerous other amino acids and amides, nucleotides, nucleic acids and some hormones.

Nitrogen is intimately involved in virtually all aspects of the life of the grass plant. Efficient use of nitrogen in turfgrass management has been the goal of research for many years. Understanding the processes that take place and the environmental factors that limit or facilitate these processes can be the difference between wasting fertiliser and saving money - therefore it's worth taking some time to understand nitrogen.

Nitrogen is absorbed by turfgrass roots as nitrate (NO3-) or ammonium (NH4+) with nitrate generally considered the form most abundant in well aerated soils of moderate pH. However, when you look at the fertiliser bag, the sources of nitrogen are often listed as urea or sulphate of ammonium; these are formulations that are economic to produce and transport. Once applied, the nitrogen undergoes several processes both inside and outside the plant that contributes to the growth and maintenance of the plant.

Urea (CO(NH2)2 is a complex form of nitrogen, which reacts with urease (a protein found in healthy soils that acts as a soil enzyme) and catalyses the hydrolysis of urea into carbon dioxide and ammonia (NH3) by attacking the carbon and nitrogen bond. The speed of this reaction is determined by temperature and generally takes up to a week. During this time, the ammonia can be lost from the soil through a process called volatilization - the loss of ammonia as a gas into the atmosphere; this tends to take place in dry soils that have a high pH and high organic matter content, limiting factors that need to be managed.

Ammonium (NH4+) is created as ammonia (which is a weak base) gains an additional proton, in a process which lends its name - protonation, this is the first plant available form of nitrogen in this series of reactions. This is an inherently fairly stable form of nitrogen that requires the presence of ammonia oxidising bacteria (AOB) and nitrite oxidising bacteria (NOB) to convert the ammonium to nitrite (2NO2-) (this is toxic to plants but this readily degrades into water and oxygen) and then nitrate (NO3-) respectively - the process of nitrification (an aerobic process performed by small groups of autotrophic bacteria). A healthy
soil contains an abundance of these microorganisms, though this process can take a few days to several weeks. The nitrate is then either taken up by the plant, leached out of the soil or denitrifying bacteria convert it back to atmospheric nitrogen. Different technologies are used to help facilitate these processes within the different fertiliser formulations.

The entire process is illustrated in the image shown.