Using the site of Palatine Park, Worthing Borough Council commissioned Speedcut to build the eight pitches for both football club training and community use.

The four hectare site in West Worthing is part of a development by Morgan Sindall, who are building a new clubhouse with full changing facilities and a car park.

Of the new pitches, two are junior, three are mini and three are senior pitches. 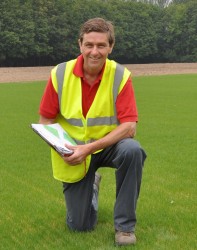 Speedcut constructed a deep-bore soakaway to accommodate a primary drainage scheme, which was installed to four of the pitches. These pitches were also laser graded to pre-determined levels, and the topsoil ameliorated with 1600 tonnes of approved sports sand.

"The facilities will give Worthing Town FC and the borough council exceptional sports surfaces and we are delighted at the results."

The project was part funded by the Football Foundation with additional funding from Viridor Credits and Worthing Borough Council.

Chris Bradley, Worthing Borough Council's head of parks and foreshore, said: "Speedcut have done an excellent job and their attention to detail has been very professional."

Other football projects completed in recent months by Speedcut Contractors have included five new pitches for Colchester United FC at Tiptree, Essex, and five pitches at Kings Hill near West Malling, Kent, as part of a major project by the developers, Liberty Property Trust UK Ltd.