by Mike McAllister, PGA
in Golf and Industry News
on 06 Aug 2016

0 Eight things to know about the Olympic golf course

Starting this weekend in Rio de Janeiro, most players will get their first look at the Olympic golf course that will be hosting the men's and women's competitions. Situated in the Barra da Tijuca region of Rio, the course -- designed by Gil Hanse and his team -- will host the first Olympic golf tournament in 112 years. 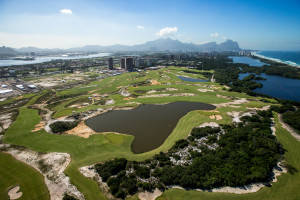 Despite having no prior knowledge of the course, players are not particularly fazed. After all, they often face similar situations at majors. Consider that only a handful of players in last week's PGA Championship had previous experience at Baltusrol, which had last hosted a major in 2005.

The deciding factor for the Olympic medals, in other words, will definitely not be course knowledge.

"We get pretty adept pretty quickly to figuring out a golf course," said Justin Rose, who will represent Great Britain along with Masters champ Danny Willett. "It's what we do, and we're certainly down there early enough from the Friday before. So we have the best part of a week to play the golf course and figure it out."

Just what kind of course is it? Here are eight things you should know.

1. No rough, no trees. Instead, balls that run beyond the fairways will end up in native areas of grass and sand. In addition, there are 79 bunkers, with Hanse calling them the "most dramatic" features on the course. He said the approach is similar to one he used when creating his Castle Stuart; the course in Scotland was one of his inspirations for the Olympic Course.

"The lack of rough will allow balls to move faster towards these areas which provide a more difficult challenge to the players," Hanse told The Scotsman newspaper. He added that the goal of Castle Stuart was to keep golfers engaged and hopeful with wide fairways and short-grass recovery shots.

"We believe this style of design has worked at Castle Stuart and has been a great model for us on the Olympic course," Hanse told The Scotsman.

2. Sandbelt style. While it has somewhat of a links-style feel, the more apt comparisons are the Australian sandbelt courses. And with good reason -- it was built mostly on what used to be a sand quarry. When Hanse presented his vision, he used the Sandbelt courses as an example.

"There's so few golf courses in Brazil," Hanse said in an interview with Reuters. "In order to paint a picture for those on the selection committee, our best comparison was Sandbelt courses outside of Melbourne, Australia, that have similar vegetation and sandy nature."

Rose, for one, thinks it will suit his eye. "Some of my favourite golf is the Australian sort of Sandbelt, and he's actually tried to use of that inspiration for the golf course," Rose said. "It has like an Openish-look, sort of a rugged look, to it."

3. Wind will be a primary defence. That's no surprise given its links inspiration; besides the 79 bunkers, water comes into play on just four holes. During the test event in March, there was no wind, but in Brazil's winter, Hanse expects windy, dry conditions.

"The deciding factor will be the weather," Hanse told Reuters. "It is typically very windy in August. We designed the golf course to handle wind. So if the wind blows like it does normally, I think it will be a really strong challenge. If it's very calm, the scoring will be lower."

The early forecast for Rio has winds less than 10 mph, although they could be stronger coming off the nearby Atlantic Ocean.

5. Same clubs for men and women. From a club selection standpoint, there should be little difference between the two events. Knowing that the course was going to host both the men and women, Hanse said "an overriding concern" was having the men and women hitting similar clubs into the greens on their given weeks. Legendary LPGA player Amy Alcott was a design consultant, and helped immensely from that standpoint.

"If we're asking the men to hit driver, 7 iron into a hole, and we've designed it as such, we need to sort of have the ladies play a similar-type shot," Hanse said during a recent interview on the On Tap radio show.

That doesn't mean the men and women will face similar obstacles in the landing zones. Hanse did not want to create massively long fairway bunkering; thus, there could be holes in which the men may need to avoid fairway bunkers while the women must deal with fairway undulations.

On the greens, expect similar hole locations for both events.

6. Sand variety. Due to its environmentally sensitive area, Hanse was not allowed to import or remove sand. Thus, he used native sand for all 79 bunkers - but he opted for three different types. Players will need to understand the differences and the nuances of each type in order to adjust as necessary.

7. Landscape variety. The course was carved out of three different sections. The northern end was once home to a mining operation. The middle section is where the miners extracted the sand. And the lower section was the environmentally conscious area.

That was the tricky area that Hanse navigated through local concerns. More than 85,000 indigenous plants were included.

"There's a certain section of the property where we were limited in what we could do," Hanse said, "and we voluntarily limited ourselves even further by shifting some golf holes around in areas where there is indigenous vegetation and wildlife."

He wouldn't be surprised to see a contender go birdie, birdie, eagle in the final round.