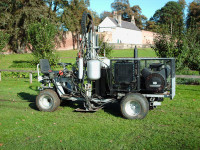 Around 130 ancient trees, forming part of a famous 18th century landscape have been treated to one-metre deep aeration treatment as part of ongoing restoration.

Gibside, near Newcastle upon Tyne, formerly owned by the Bowes-Lyons family but now under the protection of the National Trust, boasts 'The Long Walk', an avenue half a mile long lined with Oak, Sycamore and Lime. "As the gardens were designed between 1722 and 1760 the trees are at least 150 years old," says Gibside's Landscape Gardener Keith Blundell. "There are also some Turkey Oaks that I think were planted later, probably in the nineteenth century, as replacements."

The gardens, originally designed by Stephen Switzer are open 12 months of the year. Due to the popularity of the attraction, visitor numbers have increased from approximately 30,000 to 115,000 people annually in the past eight years, and this has put more pressure on the long walk, which is one of the main attractions of the property. "Some of the trees were suffering from stress with crown die-back and nutritional problems," Keith continues.

Specialist aeration contractors, Terrain Aeration worked at Gibside for three days injecting compressed air, via a probe, one metre below the surface to create underground fracturing and break up the compacted soil. "They worked between the drip lines of the trees and needed to use the JCB hammer to insert the probe most of the time because the ground was so hard," Keith explains. "Conditions in the walled garden, some of which is used as a car park but most of which is dedicated to community and volunteer allotments were much softer."

Having paid a site visit prior to beginning their contract Terrain's MD David Green decided to use the company's largest, most powerful machine the Airforce Terralift. "It's got the power and the weight behind it," he explains "and we knew, having seen the conditions that we needed all the power we could get." Working at two metre spacings, the company de-compacted around the trees and grass of the long walk before continuing treatment in the walled garden. Dried, milled seaweed was injected on the final air blast, which, as it swells when wet will keep the new, underground air channels open and add nutrients.

The gardens are part of 354 hundred acres of the Gibside estate now owned and maintained by The National Trust, with much of the site (although not The Long Walk) enjoying SSSI status. "We've got all three of our British newts, the Great Crested, the Smooth and the Palmate here as well as a programme for breeding grass snakes and our famous Red Kites," Keith explains. "With an area this size the restoration work is definitely on-going."

For further information on Terrain Aeration contact the company on Tel: 01449 673783 or visit their website at: www.terrainaeration.co.uk

Image 2:- The Long Walk at Gibside.