If you get a chance to play Gullane, take it. In fact don't leave it to chance, sell everything and resign from your job if you have to, but go and play Gullane right now. Golf writer, Bruce Selcraig put it best when remarking that "I all but cried when my round ended." So getting the contract to design and install a completely upgraded irrigation system on the premier course (Number 1) with primary components on numbers 2 & 3 was a very big deal for Irriplan, the Derbyshire based irrigation consultants.

"The job at Gullane was a great contract to land" explained Irriplan's Giles Wardle who continued, "Not only is it an historic and prestigious links, it was a very challenging job and definitely something to get our teeth into."

Wardle has hit the nail on the head, the links all around the Scottish coast are, more often than not, wonderful golf courses but they are much more than that; they are a part of the fabric of the society. They are Scottish icons. Golf at Gullane has been a part of the landscape since 1650 when loom workers would bash a stone around the hills and dunes after work. The club itself is given a formation date of 1884, seemingly it took over 200 years before the golfers managed to agree upon a constitution! The point is that links golf in Scotland is close to a religion and the mantra of 'hard and fast', 'nae wind, nae gowf' and 'play it as it lies' hold true still.

So where does an ultra modern irrigation system fit into this scenario? Doesn't the very nature of links golf mean that irrigation is anathema? Not according to Wardle who spent a long time mulling numerous problems at the drawing board before the contractors from MJ Abbott started work in October 2005. "One doesn't want 'green' turf on a links fairway, but to have 'healthy' turf during a dry summer, with windy conditions, on a sandy soil, it is imperative to have irrigation to be able to maintain a quality playing surface." Said Wardle, and he's right. 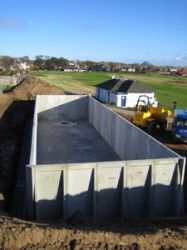 The indigenous fescues and bents are deep rooted and have adapted to the seaside conditions over millennia but, given their adoption by golf courses, they need to be managed in a professional manner - today's golfers are a more demanding bunch than 17th century artisans as Nigel Wyatt, of Abbotts knows very well, "Irrigation on a links course is to be used as a management tool, not artificial rain."

The very geology that makes Gullane special, even among such illustrious neighbours as Muirfield and North Berwick, presented Irriplan and Abbotts with a peculiar set of difficulties. A clue to the initial problem is to found in the name of the 15th Hole - 'Pumphouse'. Gullane is not a flat property that has only dunes to provide elevation and Wardle explained the difficulties that elevation presented, "There is more than 60 metres difference in elevation across the site. In order to achieve sufficient pressure in the upper parts - whilst not over-pressurising the lower parts - it was necessary to design the system with two separate hydraulic zones, a low-pressure zone and a boosted high-pressure zone, each with distinct pipe networks."

So a pumphouse - even more impressive than the par five 15th - is essential in maintaining the Rainbird, GPS as built, Nimbus controlled system that sees full tees, fairways and greens irrigation on Gullane Number 1, tees, greens and approaches irrigation on number 2 & tees and greens on 3. There might be more to come as well, Wardle again; "The system has been designed with the capacity to extend the irrigation system in the future to the fairways on courses 2 & 3."

Given the extreme elevation changes it would be safe to assume that, once conquered, the rest of the job would be a piece of cake. Not so, unfortunately. In the middle of the site is a massive lump of granite - Gullane hill - and pipes had to be laid through it. How to do this? Wardle paid compliments to Abbots "Having a granite hill in the middle of the site was also a considerable challenge.

It required a lot of patience on the contractor's part." A patience that Wyatt demonstrated when understating the effort required to complete the works, "Rock excavation and subsequent reinstatement were the biggest challenges during the contract at Gullane. These were overcome by using excavators with breakers and a rockwheel trencher was purchased." Along with many, many rockwheel teeth - 1.4km of rockwheel-hewn trenches were required, through solid granite…

So elevation changes were overcome and granite hill conquered; surely there were no further problems? "Wind - Gullane is a windy links site, therefore close sprinkler spacings were adopted and Rainbird Low Angle wind resistant nozzles used." Wardle was almost world-weary when mentioning the wind; after all the other difficulties he had overcome, the wind was the final problem. But of course the wind is what makes Scottish golf so intriguing and, as countless golfers will testify, so difficult.

April 2006 saw the completion of the contract and new Course Manager, Stuart Duff is now in possession of a fine slice of technology. Gullane's Immediate Past Captain Ross Torkington added: "We felt the club needed expert help to produce the right system and Irriplan was chosen as the consultancy that best suited our needs. They oversaw the project with regular site meetings with us and the contractor and delivered the project on time and on budget."

So, 350 years after golf was first played at Gullane, Irriplan and Abbotts have seen to it that the sacred links will continue to offer the finest golf available. Anywhere in the world. Period.