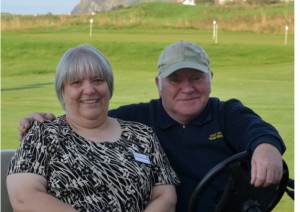 When Brian Lawrie hangs up his rake at the end of the year, it will mark the end of an era for Elie Golf Club.

For Brian, head groundsman at the club, will retire just two months short of 51 years' service with the club.

But the Lawries will still have a presence there, for wife Moira will be carrying on as assistant secretary of the club and looking after the accounts.

Brian joined the club as a 14-year-old boy. "If you had a job in your last year of school in those days you were allowed to leave," he remembered, "I had worked here in the summer before, so when they said they were looking for a greenkeeper I jumped at the opportunity.

"It was either that or joinery but I loved being outside in the fresh air, so greenkeeping came first."

Since then he has been a stalwart at the club and members sing his and Moira's praises.

It was the job that brought him and Moira together.