by External
in Industry News and Football
on 10 Jun 2015 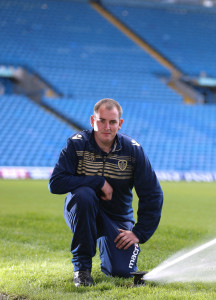 The football stadium, which is the 12th largest in England, has cost-effectively upgraded 10 existing sprinklers by replacing only the sprinkler internals and keeping the existing body and piping system intact.

"We were looking to change our heads and it was cheaper to just switch the inside workings. In doing so, we've gained significant advantages while not having to stretch our budget," says Kiel Barrett, Leeds United head groundsman.

The benefits of upgrading include TruJectory adjustment, full and part circle in the same sprinkler, the ability to clutch the nozzle base and ratchet the riser, which allows riser positioning without riser removal, and an extra 1½" pop-up height.

"The previous ones would pause at the end of the turn, flooding the area, and didn't turn very well, taking five to six minutes to turn 180 degrees. The new ones take just three minutes and there is no dwell point," explains Kiel.

As well as seeing clear benefits from the upgrade, Kiel also notes how pleased he's been dealing with Lely UK, the sole distributor of Toro in the UK and Ireland.

In fact Kiel - already an investor in Toro, with several mowers used at the club - is so impressed by the conversion assemblies that he's just ordered a further 42 for Thorp Arch; the training ground and academy base of the club.