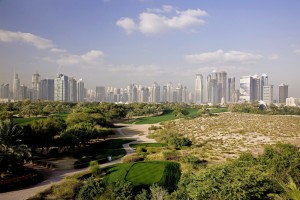 (Dubai, UAE - March 18, 2013) - Emirates Golf Club, one of the world's most iconic golf venues and home to the World Top 100* Majlis Course, today celebrates its 25-year anniversary, underlining its status as a pioneer for golf in the Middle East and home to the region's first all-grass 18-hole course.

It was in 1988 that His Highness Sheikh Mohammed bin Rashid Al Maktoum, vice-president and Prime Minister of the UAE and Ruler of Dubai, began his radical expansion plans for the region, including the construction and subsequent opening of Emirates Golf Club's Majlis Course.

Today the club sports two of the city's finest must-play courses, including the Faldo Course, which is also the only 18-hole course in the region to offer night golf. Both courses combine the natural rolling desert terrain for a serious golfing test, while the signature clubhouse in the shape of Bedouin tents, remains the most eye-catching in the region. 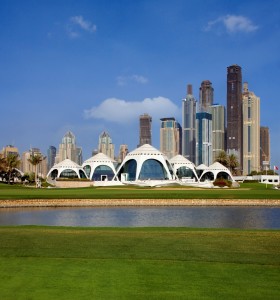 Recalling the first playing of the event in 1989, George O'Grady CBE, Chief Executive of The European Tour, said: "It was Sheikh Mohammed bin Rashid Al Maktoum's vision to turn Dubai into a major golfing destination that proved the catalyst for what has been a remarkable 25-year journey and we congratulate everyone associated with the Emirates Golf Club - and Golf in Dubai - on reaching this notable milestone.

"The inaugural Dubai Desert Classic in 1989 saw professional golf played in the Emirate for the first time on the Majlis Course, and Karl Litten's design masterpiece has been the foundation for the tournament to grow in stature and become one of the leading events on The European Tour International Schedule.

"World class players have laid claim to the iconic coffee pot trophy over the years and we look forward to meeting many old friends when we return for the tournament's 25th anniversary staging in 2014, where Scotland's Stephen Gallacher will defend the title he won in February."

The Majlis Course has been presented with numerous accolades over its 25-year history, the most recent of which were its 2012 ranking by Golf World magazine as one of the 'Top 100 Golf Courses in the World' and its award for 'Best Course Middle East' in the Asian Golf Monthly Awards 2010.

Christopher May, Chief Executive Officer of Dubai Golf, said: "Emirates Golf Club is an iconic venue and a much-loved symbol of Dubai. In a relatively short period of time it has witnessed, and been a significant part of, the region's success. With the continued support of our owners, wasl Asset Management, we look forward with great optimism to build on the heritage and reputation that has been created over the past 25 years."

To underline its commitment to uphold and enhance the quality and consistency of its courses, Emirates Golf Club recently completed a multi-million pound upgrade to its irrigation systems, installing state-of-the-art, environment-friendly technology.

The new system, using over 8,800 metres of mainline piping and 33,500 metres of lateral piping, delivers water savings by ensuring increased distribution efficiency throughout the golf course. A new state-of-the-art pump station allows up to 6,500 gallons of treated sewage effluent (TFE) water per minute to travel through the network, significantly reducing the course's water consumption.

Christopher May, added: "Whilst we are in a period of celebration we are also very conscious about our future, and our responsibilities to the wider environment. This is an extremely important period in the history of Emirates Golf Club and although this anniversary milestone gives us the opportunity to reflect, it also acts as a platform to plan for the future, with projects such as this." 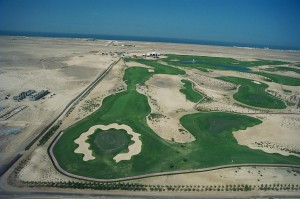 The designer's ambition for the Majlis…
Designer Florida-based Karl Litten's main aim was to preserve as much of the land's natural character, with numerous patches of desert and natural vegetation that are consistent with this terrain.

The Majlis' iconic 18th hole…
The most famous victim to the 18th on the Majlis course is Tiger Woods. Seemingly on his way to victory in the 2001 Dubai Desert Classic, Woods punched his third shot into the lake allowing Dane, Thomas Bjorn, to see out the hole and win the trophy.

Majlis course record…
The course record of 61 is held by Ernie Els (in 1994), three-time winner of the Dubai Desert Classic.

Flora, desert and water combine…
The Majlis course features hundreds of indigenous species of flora and fauna, beautifully complemented by meandering fairways and seven fresh and saltwater lakes that come into play on 10 holes.

After 24 appearances…
Englishman, Barry Lane, a veteran of 23 Dubai Desert Classics said, "It's incredible," before his 24th appearance. "When I first played here in 1989, the Emirates Golf Club was right out in the desert and now - as you see with the skyscrapers all around it - it's right in the middle of town."