3 Empowering people who look after the Cumbrian bowling greens 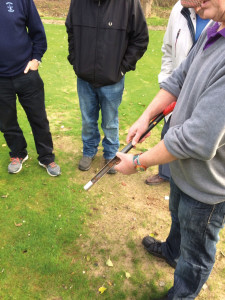 Our second annual greenkeepers seminar, in association with Pitchcare, was held at the Red River Club in Barrow-in-Furness, with the continuing aim and goal of empowering the people who look after the greens in our county of Cumbria.

As you may be aware, the world of bowls is facing ever increasing problems, with greens being lost and clubs disappearing. The situation is the same for our crown green cousins.

In Cumbria, we are looking at halting that slide by investing in our clubs to help them maintain the surfaces they currently have, and properly educate the people and members with what is required to properly look after a bowls green for twelve months of the year.

Pitchcare provides great monthly diaries, which are a good starting point for most people to get information from. However, I felt the direct approach of a qualified professional coming out and fielding questions and giving advice was an opportunity that everyone at the forefront of greens maintenance needed.

I decided to approach Pitchcare, in my role as County Development Officer, to see if it was possible for the county to set up a 'Day with an Expert' in our Cumbrian region, after I had attended a course in Harrogate that Pitchcare had run about three years previous.

Pitchcare confirmed they could do this, so I set about advertising the course, which was fully subscribed in less than a week from interested greenkeepers.

Following on from the success of last years course, and the feedback received from attendees, my attention turned to planning for the second course in 2014. This time, I wanted to pick a venue with a surface that would spark debate and that people had some connection to with regards to the issues the greenkeeper faces, such as budget constraints and machinery limitations. The greenkeeper at Red River, Stuart Aspinall, offered the use of his club as the venue, which matched what I wanted from a venue for the delegates to get their teeth into.

The Red River Club had, in the past, been a regular venue for county games. However, with changes in personnel associated in looking after the surface over a good number of years, its condition was not what it once was.

With Stuart now into his second year of maintaining the green, he is looking to bring it back up to the standard it was previously, and hopes the good times will eventually return to the Red River Club. However, under the ever knowledgeable guidance of Pitchcare's trainer, Richard Murray, who again ran an excellent day, further anomalies with the green were discovered, adding to the complexities Stuart already has in bringing the surface up to the standard he wants.

Upon taking samples of the green to find out what the composition was like, and what sort of base Stuart was working from, Richard found strange layering problems and root breaks. This showed to the delegates the need for gathering as much information about their site as possible, and tailoring their programme for their green appropriately. 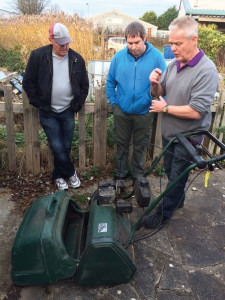 As Richard pointed out, all sites are different and, what works at one venue won't necessarily work at another. This showed the need for good agronomy reports and soil samples to see what each site has, and what the recommendations are for that specific green for the next twelve to eighteen months.

Richard then took further samples from an area that had been a problem for many years. This pulled up even more unusual results, as it showed no drainage medium and just a heavily compacted clay rootzone. Richard explained to the delegates that this led him to believe that the green had been incorrectly constructed when first built and that the drainage medium may well not have been dragged across properly.

Richard went on to explain that the green would need to be divided into two, with both halves being treated differently. He pointed out to the delegates that, by doing this sort of inspection work and getting qualified professionals in to do this, it helps to pinpoint problems and plan ways to address any issues.

The delegates found the day really informative and a great help with the problems they find on their own greens.

The information given out about changes in legislation, with regard to spraying certification, also highlighted what clubs need to be doing going forward to ensure that they are compliant with these changes.

Professionally run days like this prove how crucial they are for keeping people involved in the industry up to date with legislation changes, as well as changes in working practices. This is one of the main reasons I went to Pitchcare, as they are a company who have no hidden agenda and want to help and inform people working in the turfcare sector.

I do believe that people need to have the information and knowledge at hand so they can make informed decisions about the areas they look after.

The game of bowls, across all codes, is feeling the squeeze in both retaining their clubs and members, whilst trying to drive new players into the game. The surface we play on is a club's biggest asset, yet it is the first thing that committees look to save money on. However, if you don't have a good surface to play on, how are you going to drive new players to take up the game?

If the surface continues to lack investment or have the correct work carried out on it, then it follows that it will fall into a state of disrepair, with clubs facing a huge bill to put it right which, in most cases, they won't be able to fund. This, consequently, leads to further insecurities at the venue for years to come.

This is why, in Cumbria, we are starting to address these issues with the help of Pitchcare; to help inform and educate the people at the forefront of our game who look after the surfaces we play on.

Already, the outcome from this second seminar day is that the local delegates would like a County Greenkeepers Forum setting up, where local greenkeepers can meet every couple of months to air their problems and pool their resources to help one another. I don't believe that, without attending this seminar day, they would be thinking so proactively, and that's due to the way Richard provoked debate about what is required to look after these sporting surfaces.

And so, my thoughts have already turned to next autumn and where to take the course for next year's seminar. One thing is for sure; there will be plenty of interest from people within the county after the word has spread about just how good a day Richard and Pitchcare set up at Barrow-in-Furness.