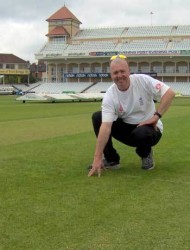 We were able to start our renovations early this year, beginning in the second week of September, an ideal time to maximise the favourable soil and air temperatures for seed germination. We began by sweeping and cleaning off all the loose debris from the square and cutting it down to 5mm. We then scarified the square in three directions using a Graden set at 8mm depth, and cleared up ready for repairing the ends and overseeding.

The wicket ends were all repaired and re-levelled using about ten 25kg bags of Surrey's Supernatural Loam. Once this was completed we over-sowed the square at recommended rates using 50/50 blend of Barenbrug's Bargold and Barlady.

I do not usually cut the square again until the second week in October, once the new grass has established itself and the soil conditions are right for aeration. I begin our programme of aeration, using both the vertidrain and then the Groundsman pedestrian aerator to penetrate the surface to a depth of 125mm. It is important to provide a key for the new topdressing material to be worked into. We then topdress the whole square, again using the Supernatural Loam.

A similar process is also undertaken on all our practise net areas. We know that the quality and playability of our square and practise net areas next year is very much down to the success of this year's end of season renovations.