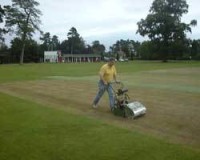 Following a very successful season, it comes to that time of year when the cricket square needs putting to bed for the winter.

Preparation work started in early September when the entire square of 14 wickets was sprayed for the suppression of worms and leatherjackets. A mixture of Turfclear for the worms and Crossfire 480 for leatherjackets was used, applied with an Allen Field Master sprayer. Early indications were very promising, with no signs of worms at all, as the weather turned wet towards the middle of September. 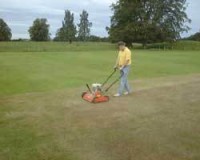 Following completion of the last match of the season work started in earnest. Over the next five days the square was cut using the Actco mower reducing the height to about 3mm. This was assisted be using the Sisis Lawnman with rake attachment fitted to remove as much grass as possible.

Scarification followed using a pedestrian machine, and finally another mow to remove all 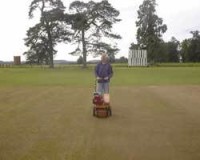 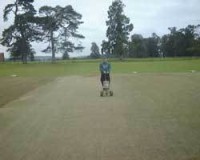 Finally the loam was worked in by hand using a Sisis Trulute.

Unfortunately the club does not posses germination sheets so the seed will be left to germinate naturally, which should take between 7 and 10 days, depending on weather conditions. 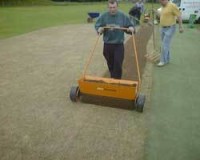 All sprays, fertiliser, seed and loam were supplied by ALS Ltd.

The work marks the end of a very successful season for the club with the 1st X1 gaining promotion to division 1 of the Shropshire league and the 2nd X1 gaining promotion to division 4. With a thriving junior section the club is planning for further success in the future. The club is hoping to have at least five more coaches for the juniors next season, with up to 80 children playing cricket of one form or another.

As part of this investment process the club is currently obtaining Clubmark accreditation from the ECB, and updating its development plan for the next five years. Part of the development could well involve the re-laying of wickets, as well as the installation of a new irrigation system for the square. 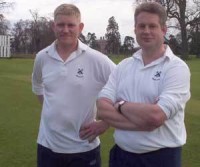