Kingsbarns Golf Links has finished the 2014 season on a high with special recognition at Scotland's golf Oscars and a prominent showing in the latest edition of one of the UK's most respected course rankings. The Fife course rounded off the year by picking up the top award at the Scottish Golf Tourism Awards and climbing up Golf Monthly's top 100 UK & Ireland golf courses list for 2015/16. 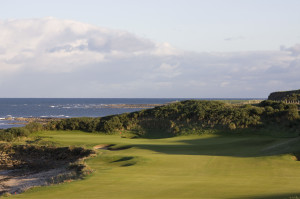 After collecting the accolade for Best Overall Golf Experience in Scotland at a gala event in St Andrews, Kingsbarns chief executive Alan Hogg said the 2014 season had been a year to remember. "The last 12 months have been incredible for Kingsbarns, but also for Scotland as a whole," he commented. "We have seen record numbers of visitors from across the world while the course has been in the best shape ever. As proud as we are of our achievements, it is great to share these good times with the rest of the country."

Art Dunkley, director of Kingsbarns Golf Links was equally delighted with the award. "We have been extremely fortunate to receive so many compliments about our course and facilities," he said. "This latest honour at the Scottish Golf Tourism Awards is especially important as it reflects our focus on creating the best possible links experience which includes more than just an enjoyable round of golf. Exceptional customer satisfaction is a large part of our total golf experience and I am extremely proud that the dedicated Kingsbarns team has been recognised for their constant focus on our customers."

Located near St Andrews, the highly acclaimed links course has been one of the most admired venues on the European Tour after co-hosting the Alfred Dunhill Links Championship for over a decade. Its status was raised further this year when Kingsbarns was selected to host the Ricoh Women's British Open in 2017.

Its inclusion in the top third of Golf Monthly's latest rankings (at 21st position up six on the last ranking results) reflects the praise given by the assessors who marked each venue on quality of design, condition and presentation, visual appeal, facilities and experience. "Kingsbarns is visually stunning, set along a beautiful piece of coastline with the sea visible from nearly every hole," noted one panellist, while another said; "at all times you're made to feel very welcome at Kingsbarns. Customer satisfaction is clearly the highest priority".

Commenting on the list, Hogg said it had rounded off a fantastic year. "The Golf Monthly's ranking is a fitting way to end what has been an extremely successful year for us," he noted. "The icing on the cake has been the Scottish Golf Tourism award and our position in Golf Monthly's new rankings."

He continued: "These accolades reflect our team ethic when it comes to customer service, but also indicates the efforts put in by our course manager Innes Knight and his highly skilled team of greenkeepers and the caddie programme under the experienced leadership of Sean Wiseman which is widely regarded as one of the best in Scotland."

Discussing the course at this year's Alfred Dunhill Links Championship, the 2014 Race to Dubai winner Rory McIlroy said: "I love Kingsbarns. It's just a great golf course to play. Kyle Phillips has done a great job." He was joined by a host of star players in October including Victor Dubuisson, Ernie Els and victorious Ryder Cup captain Paul McGinley, who commented: "It's one of my favourite courses to play. It is modern golf; a modern design [and] a pleasure to play."

In addition to hosting European Tour stars and attending award ceremonies, the team at Kingsbarns has been busy making further improvements to its visitor experience. The 300m2 enlargement of the short-game area which opened in 2014 has proved especially popular. Add to that the R&A's decision to build its new Ball and Equipment Test Centre at Kingsbarns and it is understandable why the venue has been so widely recognised in magazine rankings.

With St Andrews hosting the 144th Open Championship in 2015, Fife will once again be at the centre of the golfing world in July. "The 2015 season will provide another opportunity to take our service offerings to yet another level," said Hogg. "After what we achieved this year, the entire Kingsbarns team is looking forward to an exciting 2015."