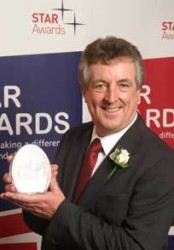 Over 1600 nominations were received in this inaugural year of the awards, and 130 nominees were shortlisted in 13 categories, sponsored by 12 different organisations. Sixteen of the most outstanding candidates across the whole sector, including Richard Trevarthen, were specially selected to compete for the top prize, the STAR Award for Outstanding Achievement.

"It is absolutely wonderful to hear I'm a winner. I am honoured to work with an incredible team of staff and my students are all a pleasure to teach. This award is not just about my work, it's about them too," said Richard Trevarthen at the recent awards ceremony in London, attended by Charles Clarke, Secretary of State for Education and Skills, and Kim Howells, Minister for Lifelong Learning, Further and Higher Education.

Launched in November 2003 by Charles Clarke, the STAR Awards are a new way of recognising the work of teachers, trainers, managers and support staff working in the learning and skills sector. These are the individuals, more than 600,000 in a diverse range of jobs, who have made an invaluable contribution to the quality of learning that millions of people in England receive every day.

All the final category winners were nominated by their students, colleagues or managers, and come from workplaces in sixth form colleges, further and adult education, community and work-based learning, prisons, education services and UK online centres. The STAR Awards independent judging panel based their choices on those who had made a difference to the lives of their learners with their willingness to exceed expectations and enrich the learning experience.

Richard Trevarthen, who has been a machinery lecturer and Landbased Service Engineers (LBSE) course tutor at Brooksby Melton College in Leicestershire since 1969, was nominated by Peter Leech, John Deere Limited's Manager, Customer Support. Peter has worked with Richard since 1990 in developing and managing the John Deere Ag Tech programme.

In addition to the John Deere Ag and Turf Tech agricultural and groundscare apprenticeship programmes, Richard has been heavily involved in developing engineering standards, curricula and qualifications, and is part of the Lantra Industry Group. He also runs a stock car racing team with his sons Mark and Ian, and pursues a strong interest in vintage tractors and machinery.

"Richard has a 'can do' attitude to teaching, as well as boundless energy and enthusiasm," commented Peter Leech in his nomination. "He has instilled these characteristics into hundreds of young engineers, apprentices and others, who have been drawn into the infectious enthusiasm Richard has for the industry and the passion with which he delivers education.

"Richard's determination to make it succeed was one of the keys to the successful development and introduction of the John Deere Ag Tech programme in 1992. Since that time Ag Tech has become the industry benchmark for such schemes, winning a National Training Award in 1997 - still the only one of its type achieved by an agricultural engineering apprenticeship scheme.

"Students from the programme have won many City & Guilds Medals of Excellence, and one, Dan Massey of John Deere dealer J E Buckle Engineers, has gone on to win the Learning & Skills Council Modern Apprentice of the Year Award - a true testament to Richard's abilities and influence."