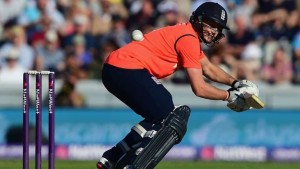 A sun drenched and packed Old Trafford set the scene for the finale.

Having won the toss, England decided to bat first, and proceeded to pile on 191 for seven in their 20 overs.

Joe Root was the star of the match, hitting 68 off 46 balls, while Alex Hales, Jason Roy, Sam Billings, and Ben Stokes all played their part.

New Zealand made a spectacular start to their chase as Brendon McCullum took to the stage, scoring 35 from 15 balls. However, it was not to continue forever, as he tried to whip a full ball to the leg side and it ricocheted off his bat onto off stump for Wood's first wicket.

Kane Williamson added 57 off 37 balls and New Zealand were looking strong. But losing wickets at regular intervals reversed their momentum, and nobody could really support Williamson's act, meaning that New Zealand were soon well short of their target.

"It was a fantastic way to finish what has been a great month's worth of cricket. This felt a million miles away after the World Cup, we had a lot of hard work to do but it has turned round pretty quickly and that is credit to Paul Farbrace and the rest of the backroom staff and the way that the players have bought into the philosophy," said a delighted Eoin Morgan, who has reinforced his position as one-day captain.

Now the Three Lions can look forward to the Ashes series against Australia, starting on July 8th in Cardiff.