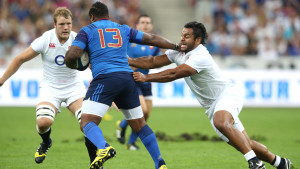 Last night was a night that many English rugby fans will be trying to forget this morning, with England's 25-20 defeat by France

The second warm-up game before the World Cup took place at the Stade de France in Paris at 20.00BST yesterday evening.

Those just looking at the scoreline would be forgiven for thinking it was a close game, but unfortunately England were thoroughly outplayed for the first 65 minutes of the game, scoring two tries in the last fifteen minutes. Outplayed at the breakdown, and second best at the set piece, it was a frustrating game for those supporting the red rose.

Aside from the performance of the teams, another vexation during the scrums was the decidedly inadequate nature of the pitch, which churned around the players' feet, and caused endless reset scrums.

Jeremy Guscott, commentating on a scrum during the game, stated: "Look at the pitch cutting up. Oh dear, that is a shocker!"

Later on, while the players and referee were stamping down sections of the cut up pitch, Guscott commented that he "didn't realise that was in the ref's remit", to "repair the pitch".

Although this morning most people are speculating over England's chances at the World Cup, we at Pitchcare will be pondering the state of this international-standard pitch.