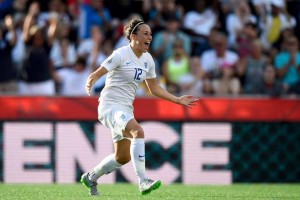 Lucy Bronze's awe-inspiring long-range strike sealed the deal in the 76th minute, hammering into the top corner, much to the dismay of Norwegian goalie Ingrid Hjelmseth.

To set up a quarter-final tie against host nation Canada, England had to beat the 1995 World Cup champions Norway, a side they had failed to beat in their last four attempts at major tournaments.

For the first half, it looked as though England might struggle to beat Norway, with holes appearing in the England defence, a waste of possession, and a lack of support for lone striker Toni Duggan. The sweltering conditions seemed to be getting to the team.

Solveig Gulbrandsen put Norway into the lead early in the second half, but the score was equalised seven minutes later by a header from Steph Houghton. This was followed by Bronze's winning goal 15 minutes later.

England closed out the final 14 minutes without any real threat of losing their advantage, and when the whistle sounded the end of the game, a rush of substitutes charged onto the pitch to join their team-mates in an emotional celebration.

England will face Canada in Vancouver for the quarter-finals at 00:30 BST on Sunday. Let's hope they can beat the team that beat them 1-0 in their final warm up game before the World Cup.