It is the harsh and unpredictable seaside conditions that has traditionally made links golf such an enticing endeavour but, for England's oldest course, at least, they are proving too much of a challenge. 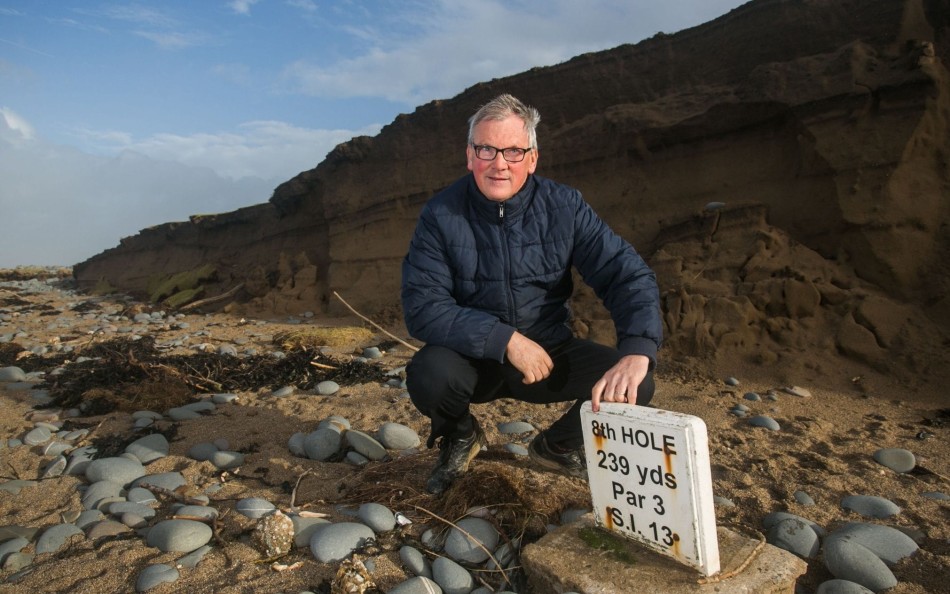 The Royal North Devon Golf Club has accused the Government of "abandoning us to the ocean" after Storm Eleanor prompted the collapse of part of its eighth tee and high tides expected next week threaten the demise of the seventh.

Designed by the famous Victorian golfer "Old" Tom Morris, the course at the mouth of the Taw-Torridge Estuary is renown as the "St Andrew's of the South" and one of the UK's toughest.

The historic lay-out now faces permanent disfigurement, however, due to the brutal coastal erosion.

More than 50 yards of the championship course has been lost as a result of the "preventable" collapse, with boulders strewn across one of the fairways. 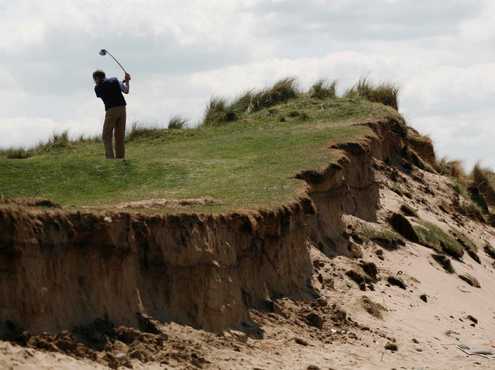 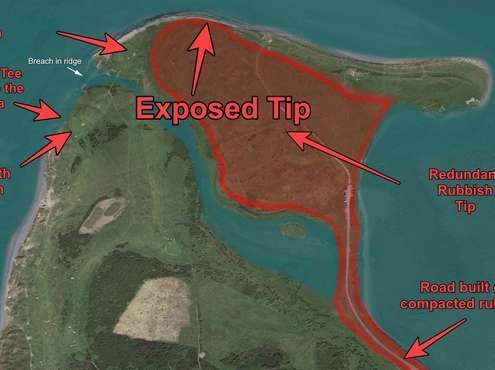 Left: The eighth hole is now 50 yards shorter. Right: Exposed: The club is situated on the mouth of the Taw-Torridge Estuary

Yet Natural England, the body responsible for the stretch of coast near Westward Ho!, appears content to let the sea reclaim the land, according to the club.

The agency insisted no suggestions were ruled out, but a statement explaining that "the dunes and shingle ridge are naturally dynamic coastal features and subject to constant change" have been seized on by local golfers as evidence civil servants are determined to let "mother nature take its course".

Mark Evans, the club's general manager, said: "By allowing this collapse we are tampering with history. There's no plan at the moment - it's a disgrace." See the video below for more comments from Mark.

Founded in 1864, the club quickly gained national status thanks to the patronage of the then Prince of Wales, later Edward VII, who bestowed the royal title two years later.

Believed to be substantively unchanged since the original Tom Morris design, the course is the oldest in continuous use in England.

While other land is available which would allow the club to reconfigure the course away from the coastal collapse, this would make the golf "not anything like as interesting", according to Mr Evans.

Natural England said it would permit the club to build two new greens, providing it relinquished the two existing ones threatened by erosion.

The collapse and subsequent flooding have also provoked fears over the security of a nearby landfill site containing hospital waste and other toxic material such as asbestos.

You can read the full article from The Telegraph HERE