Hampshire head groundsman Nigel Gray believes the Ageas Bowl pitch is in good shape for the third Test between England and India. 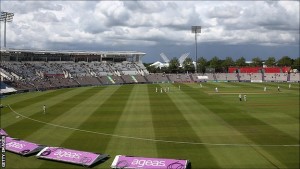 The Trent Bridge pitch for the first Test earlier in July was rated "poor" by the International Cricket Council.

The Lord's Test, which England lost, began with a green strip.

"It's firm, there is a covering of grass on it, so it is looking like it will be a good pitch to me," Gray told BBC Radio Solent.

"It won't be as grassy as Lord's was when that Test started, it will be much more like the Test we had against Sri Lanka three or four years ago, which was a good pitch. It went through, there was a bit in it for the bowlers and the batsman can play their shots, so I'm expecting very similar.
"It's the same 22 yards, so it looks like it should be a good pitch again, but you never can really tell until you start playing on it.

"We want it to have a little bit of assistance for the seamers if possible rather than being a flat road. We want a decent balance between bat and ball."

The pitch for the first Test of the series at Trent Bridge attracted criticism from both ex-players and the media, with BBC cricket correspondent Jonathan Agnew describing the way the wicket was playing on the opening day as "utterly demoralising".