0 English cricket enriched by charge of the heavy brigade 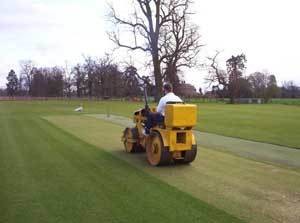 It is a small matter, but it is unquestionably a very big thing. In fact it is more than 254kg in weight. Anything up to 1,014kg and beyond even. Now that is big.

And it is causing a big fuss in county cricket right now. If you are thinking that only in county cricket could this happen, then you would be correct. A county season can never be officially deemed under way until there is complaint in the air. Moaning is the game's very heartbeat, and I should know, because it kept me going as a player for nearly 20 years. It is what county cricketers and spectators do.

We are talking about the heavy roller here. You know, the huge, loud monstrosity that is driven up and down the pitch at a snail's pace by some poor bored-out-of-his-mind groundsman. The long hours spent on it are essential to the preparation of any good cricket pitch.

But it is not those hours before the match about which anyone is complaining. Instead it is the very small periods during a match. Up to seven minutes each, to be precise.

Let me explain. For the past three championship seasons the use of a heavy roller after the start of play was banned. Or as the regulations put it: "Law 10.1 (c) is replaced by: a roller heavier than 254kg may not be used after the commencement of the match."

Not this season. Now the dastardly Law 10.1 (c) prevails. And just for clarification Law 10.1 (c) adds: "Choice of rollers: If there is more than one roller available the captain of the batting side shall choose which one is to be used."

It is a travesty and a tragedy rolled into one. Or so the bowlers say, anyway. And I should declare that I was once a batsman. I do not agree.

The heavy roller is back. So first of all keep an eye out for that moment when an innings concludes and, as the fielding side walk off, the groundsman shouts to the captain and asks which roller he wants.

Acting like some world war general, the captain will raise a flat palm either high in the air or low to the ground to signal a heavy or light roller. If he is like I was as captain, he will have little idea of the possible effects, but it is always such a moment that makes you feel mightily important.

But also keep an ear out for the laments of those querulous bowlers. The batsmen are back. And big scores are back. There have been six championship double centuries already, by Yorkshire's Joe Root, Chesney Hughes of Derbyshire, Hampshire's James Adams, Chris Rogers of Middlesex, Sussex's Luke Wells and, most recently, Sam Robson of Middlesex (Samit Patel got one against the students of Durham too, but that should not count). And there were only five such scores in the championship in the whole of last season.

Basically what happened in those last three years was that, although there was some exciting and result-laden cricket, the bowlers had it easy. Especially on early-season pitches that were naturally damp, dents were made in the surface that could not be rolled flat by a heavy roller. The deadly consequence for the batsmen was a cocktail of uneven bounce and lateral movement. As Mark Ramprakash observed then, batting was a lottery.

See the rest of the article on the following link:- The Telegraph