by External source
in Industry News
on 19 Jan 2015 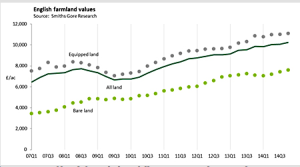 In 2014, the value of farms with houses and buildings, known as equipped land, rose by 2%, so a slower rate of increase compared with the 12% gain in 2013. This weaker growth is due to buyers becoming more discerning about the quality and type of land that they will buy. Pre-2014, there was strong demand for land of all qualities and buyers would bid above asking prices to ensure that they were successful. In 2014, farmers have aimed for high quality land, there have been fewer bidders on lower quality land and buyers have actively avoided farms with large farmhouses that could be costly to maintain. So the driver of the market has switched strong demand, fuelled partially by low amounts of land to buy, to weaker demand.

The value of bare farmland, with no houses or buildings, rose by 7% in 2014 to an average of £7,600, after a 2% increase in the final quarter. Demand for bare land is almost entirely from farmers - rather than from lifestyle buyers or investors - and it has remained strong, especially for arable land, which rose by 6% in 2014, compared with grassland, which rose by 3%.

"2014 continued farmland's strong rise in values that started before the recession and has continued since 2009, which has made land one of the best performing assets of the last five years. Both bare and equipped values have now increased for five consecutive years, with equipped land values rising by 54% since 2010, from £7,200 per acre, and bare land values rising by 58%, from £4,800 per acre", says Dr Jason Beedell, Head of Research at Smiths Gore.

Demand continues to outweigh supply, which drives continued price rises. In particular there is unsatisfied demand for larger arable blocks, and our agents are seeing a premium being paid for larger blocks of land.
There were 18 properties over 750 acres marketed in 2014, which is a small number of large farms nationally, but is actually more than in 2011, 2012 and 2013, when 15 were marketed in each year.

Compared with this time last year we now know how the Common Agricultural Policy is going to be implemented over the next five years. This has removed one uncertainty from the market and the reform was as positive for farming as it could have been, given the pressure on the European Union's budget.

Agricultural commodity prices are lower than a year ago. We do not think this signals a period of volatility and indeed prices have improved for combinable crops, beef and sheep over recent months. Further, the five-year outlook for agricultural commodity markets remains positive. This should provide some comfort for farmland buyers.

2015 will also see a General Election, which is likely to be amongst the more unpredictable of recent history. We will find out in May how the outcome could affect the economy, rural communities, agriculture and what the impact on land prices could be.

The most significant risk to farmland prices remains a change in the beneficial tax treatment of farmland, but we rate this risk as low to medium.

We expect farmland values to continue to rise, but modestly, by 3-5% in 2015, so more slowly than the 9% average over the last five years.