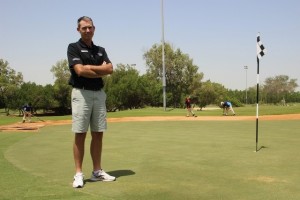 The grass, as the fabled cliché proffers, is always greener on the other side of the fence. But what if that fence runs through what used to be desert? Keeping the grass alive at two of the world's most admired golf courses, let alone ensuring the putting surfaces are like billiard tables, surely takes something, or someone, special?

Fortunately, if there's a man who knows a thing or three about growing grass in extreme climates, it's Andrew Whittaker. The group head of agronomy at Abu Dhabi Golf Club and Saadiyat Beach Golf Club even has an award to prove it, having been anointed Superintendent of the Year at Troon Golf's recent global leadership conference in ­Arizona.

It's some accolade when you consider the Troon network incorporates more than 250 top-end resorts and courses around the globe, very few of which face anything like the daily challenges that confront Whittaker and his teams, and soars in direct correlation with the rising mercury. How many greenkeeping teams, for example, clock on at 3.30am during the height of summer, simply to beat the heat?

Throw in the added pressure of presenting Abu Dhabi Golf Club in pristine European Tour condition for the Abu Dhabi HSBC Golf Championship each January - and Whittaker has his work cut out. 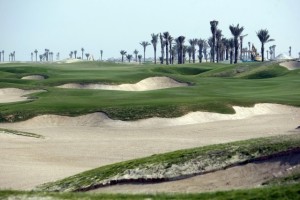 "Nothing prepares you for the harsh environment that the Middle East summer can bring," says Whittaker, who hails from Clitheroe, near Preston in ­England.

"The main agronomy practices are similar with scheduled renovations and daily maintenance. But with nature and the extremes of weather, you have to be proactive and reactive each day to combat the challenges and continually provide a golf course that meets the expectations of guests."

Whittaker is clearly exceeding those expectations. In addition to the global Troon gong, the team the Englishman heads at Abu Dhabi Golf Club was named Golf Course Maintenance Team of the Year at February's Middle East Golf Awards, the region's golfing answer to the Academy Awards.

While Whittaker was an amateur golfer with a single-figure handicap, it became evident early on that a career in the game wasn't going to be via the paid-to-play ranks. Instead, he found his calling around the greens to be more green-fingered than ­wedge-tastic.

Now 36 and the father of two young sons, Whittaker studied at Myerscough College, a renowned horticulture and sports turf training facility in his native Lancashire, before heading to the United States, where his knowledge was expanded during a 24-month intern programme at Ohio State ­University.

You can read the full article from The National HERE