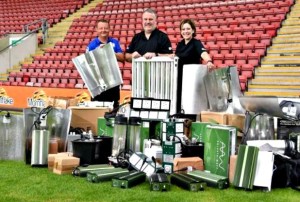 Officers have donated a hydroponics kit to League Two Crewe Alexandra Football Club to help them maintain the playing surface.

The kit, which includes specialist lamps, heaters and power connectors, was seized by police during a series of swoops across the town in 2013.

The raids resulted in a 41-year-old man being sentenced in February 2015 to five years eight months in prison and being subject to a proceeds of Crimes Act Confiscation Order for more than £290,000.

It is hoped the equipment will be used by the team's ground staff to maintain and improve the pitch.

The Alexandra Stadium's pitch is notoriously difficult to restore to its pre-match condition due to a large portion of it never seeing the sunlight.

Crewe Alex's stadium operation manager, Bev Dyer, said they were sure the equipment would be of real value to the ground staff.

She said: "We would like to thank Crewe Police for the kind donation and we are sure the ground staff will be able to use the equipment to help with certain areas of the pitch."

Crewe Alex fan Steven Dale said he hoped it would be a step in the right direction.

He said: "If the use of this equipment is successful then it might make the club look more professional.

"It is fairly embarrassing when your pitch is barely fit for purpose half way through a season."

However he was uncertain it would help boost the team's performance on the pitch.

He said: "That might sound a little harsh, but I am very much of the opinion that this is one of many excuses that we hear from the club as to why we are not successful at home.

"I understand that our pitch can be difficult to play on - but other teams still find ways to adapt and grind out results.

"The other argument that I will put forward to back up my opinion is that we always start the season poorly when the pitch is fresh."

Season ticket holder Alister Walker, aged 40, of Sandbach, said: "I know we need a left back, striker and midfielder, but I never thought equipment from a cannabis factory may help us get promoted.

"We will now be able to have a perfect pitch and hopefully return to playing beautiful football.

"I have heard of the police giving away the compost from drugs dens before but never the heating equipment."

Inspector Kate Woods, of Cheshire Police, said: "The cannabis farms were extensive and left us with a lot of kit which we knew could be put to good use by the club.

"We wanted this gesture to highlight to the community that we are taking illegal drugs off the streets all the time, and couldn't do this without their help.

"People are integral in helping to tackle drug dealing in your community so I would urge anyone with information to contact 101."

For the original article, visit www.stokesentinel.co.uk.