by Charles Henderson
in Consultancy and Golf
on 27 Jan 2014

In 2011, Essendon came under new ownership and, with it, came a group of enthusiastic people dedicated to the provision of quality golf in combination with high levels of service.

The site has a range of golfing facilities which match many higher profile venues. The Old Course, designed by Fred Hawtree, was constructed in 1976. The New Course was constructed in 1992 and is increasingly popular with members and visitors. In addition, the club also has a 9-hole academy short course and a new driving range.

The Course, when under previous ownership prior to 2012, had not been managed with the eye for detail and forward thinking approach it now has. As a result, limited maintenance resulted in a decline in the courses, including greens.

In 2012, Golf Course Architect Alan Walker was appointed to advise on course refurbishments, with Sports Agronomy Services (SAS) appointed to review the condition of the greens and course. The objective of the appointment, set by the club, was to identify the limitations of the greens and to lay out the options for improvements.

A factual based advisory service was used to assess, in detail, the characteristics of the greens. 2012 presented some of the highest annual rainfall in our lifetime, and this showed weaknesses in greens throughout the UK, including Essendon. The initial assessment was carried out in October 2012 and highlighted the following:

- Ground cover was thinning in places due to saturated upper soil profile conditions
- Silver tipped moss had invaded areas of greens, due to a combination of excess moisture retention and excess organic matter
- Surface firmness levels fell outside of desired winter target ranges
- Ball roll was being impacted upon by the soft surfaces when wet
- Organic matter in the upper 0-50mm was higher than desirable
- Species composition was dominated by poa annua and thatch conditions were making disease control very hard 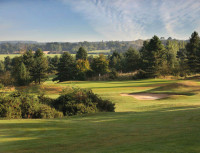 From the outset, Essendon asked for a frank understanding of their position and remedial options. This approach to the management of golf courses, and indeed the club, is all too rare. It was this approach that allowed a passageway for improvements to be made.

The club were presented with findings, following the fact based assessment and laid out three feasible surface renewal schemes:

The options outlined varied in speed of efficacy, disruption to golf and cost of implementation. The operational business of the club, its cash flow and the continued use of the greens, were pivotal to the club, therefore large scale reconstruction and resurfacing was excluded at this stage.

In contrast, long term slow and gradual improvement was also considered unsuitable, as it was accepted greens needed to be in a better position in order to withstand wet winter conditions in 2013.

Taking the above into consideration, Essendon commenced the surface renewal rejuvenation scheme in March 2012. 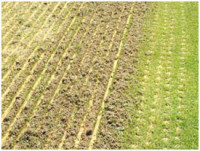 The dominating limiting factor, resulting in lower winter playing quality and the promotion of disease, was excessive organic matter in the upper soil profile. The organic matter present was also moisture retentive.

Working with the club, an intensive scheme of three combination treatments was set out for both courses. This involved site specific sequenced treatments:

Overseeding has been omitted at this stage as surface conditions are not suitable for sufficient success to warrant investment. As surfaces become inherently drier, species content in greens will be reviewed along with overseeding practices. 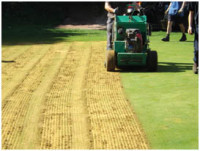 Each combination treatment allowed the club to achieve a conservative 15-20% surface impact. Treatments were staggered between courses and commenced in late March, mid summer and autumn. The combination of three treatments, taking into consideration overlap, allowed for approximately 40-50% impact of the upper profile to be modified in its nature within a single year.

The commitment by the club, to this process during 2013 was exceptional. March 2013 presented some of the most difficult conditions, with snow, heavy frosts and low soil temperatures prevailing. The works had to continue, in order for the club to realise an improved winter standard.

In total, the club carried out six treatments of this nature on all of their greens during 2013, the management of these operations by Course Manager, Craig Gibson, and the commitment of the greens staff was inspirational. The commitment and endurance demonstrated by the club owners and management has been exceptional.

Craig has experienced difficulty in managing the greens at Essendon over the last three years as resources reduced. Perhaps the hardest challenge was poor efficacy on products applied for fusarium control. Control has now been made much easier, with surface organic matter reduced and moved away from the immediate surface. 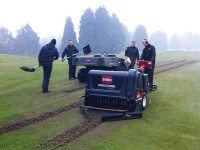 Perhaps the main fear during the process was disruption; to playing quality and for the membership. With correct planning and implementation, surface renewal schemes are able to reduce surface disruption and get playing surfaces back to full grass cover and back to a suitable playing quality within improved timeframes.

Each renovation within the growing season achieved full grass cover within 7-10 days and suitable putting quality within 14-20 days. However, play commenced on greens throughout these processes.

Club Manager, Jonny Harvey comments: "Golfers gaining maximum enjoyment from our courses is one of my main concerns. News of the surface renewal works naturally aroused fear of disruption. Once into the growing season, operations have been carried out with minimal inconvenience."

Essendon, through using the surface renewal scheme, have achieved an average reduction of 5% (loss on ignition testing) at 0-20mm and have sustained organic matter levels at 20-40mm with no notable increases lower in the profile.

As a result of the above reductions in organic matter content, it has allowed the default moisture content (when at its wettest) to be reduced, making for drier, firmer greens in winter. Firmness, as measured in gravities using a Clegg impact hammer, has increased at its wettest by some 8 gravities from averages of 58 gravities to 75 after one year of works. Ball surface interaction from approach shots is now improving and foot printing in winter has reduced. Essendon continue work to improve winter firmness levels, targeting 80-90 gravities in winter periods.

Overall, the surface renewal works have rapidly increased the club's position and their ability to produce better greens going into winter and beyond, a matter of vital importance to the club.

The club continues to focus on moving forward and will be implementing phase two Surface Renewal Schemes in 2014; modified practices will allow the club to target deeper in the soil profile, along with continued progress at 0-20mm in upper profile.

The rest of the course

Aside from the greens, Essendon continues to invest throughout the course and in its maintenance setup. The team, lead by Craig Gibson, has embraced the new challenges brought by new ownership and increased investment. After years of managing on limited resource, this brought about a chance to achieve better standards throughout the course. Craig continues to focus on additional projects including:

The industry has observed investment in golf decrease in recent years. Essendon has bucked this trend and, with an increase in membership of over 60% through 2013 alone, is well on the way to fulfilling its business plan.

The greens renewal works have played a vital role in Essendon's progress, together with the raising of standards throughout the club's infrastructure, producing an excellent golfing experience. I have worked closely with Essendon for a year now and, if the way they have approached management of the club to date is anything to go by, I have no doubt they will continue to make progress.