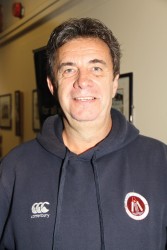 Barry Glynn, Head Groundsman at East Molesey Cricket Club in Surrey - and sometime Elvis Presley impersonator - was one of the delegates at the recent cricket groundsman's seminar at Essex County Cricket Club. Organised by Stuart Kerrison, with Dennis Sisis as the main sponsors, he found the day - and the evening - most enlightening!

Driving up to Chelmsford late on the Monday afternoon was a good move on my part, for numerous reasons. Firstly, it meant I didn't have to negotiate the infamous M25 and Dartford tunnel during the height of the morning rush hour. At any time of day, it's not a journey to relish unless you are a masochist. Secondly, it gave me the chance to partake of bread and wine with some fellow groundsmen and the goodly people of Dennis Sisis. A very convivial evening and a chance to put some faces to some people I have spent five years arguing, err I mean speaking with, on the Pitchcare forum.

We also took the chance to sing happy birthday to Vic Demain, Head Groundsman at Uxbridge CC, whose age seemed to go down by a year every time we asked him. I sat there happy as a pig in poo listening to the chat of experienced groundsmen. My hotel, on a roundabout and next to Tesco's, was not that bad; ear plugs are a wonderful thing.

So to the day. A bright start at 9.00am gave the chance to meet and chat with a multitude of fellow groundsmen. I was eagerly awaiting the day, as the brief said it was to be a day for groundsmen by groundsmen. I was not disappointed.

Cricket World was videoing the whole day and footage will be appearing on their's and Pitchcare's websites in due course; and Laurence Gale of Pitchcare was snapping merrily away all day.

Robert Jack of Dennis welcomed us all and introduced the host, Stuart Kerrison, Head Groundsman at Essex CCC. Stuart mapped out the day in his inimitable and

humorous way and introduced the first speaker, a somewhat nervous Robert Gurney from a local village club. But Robert soon relaxed as he got into his spiel about the delights and problems facing a small village club. Robert seemed to hold just about every position in the club, apart from tea lady! What came across from Robert was not only his enthusiasm regarding things groundscare, but his obvious love of the game itself.

Next up was the Morecambe and Wise show - Stuart Kerrison and Vic Demain. Their presentation was on outgrounds for County cricket. Apart from his main duties for the County ground at Chelmsford, Stuart is also responsible for two outgrounds, currently Lower Castle Park in Colchester and Garons Park in Southend.

What I found interesting was a factor I had not thought about much regarding outgrounds - what a big financial risk it is. This is because it costs many thousands of pounds just to get to the point before a ball is bowled. In today's litigious world, Health and Safety issues, crowd control, seating and catering, all have to be organised and scrutinised to the nth degree. The day arrives and it hisses down; result, thousands of pounds are lost. In Vic's case at Uxbridge, this can mean vital monies lost to his club's coffers, plus money lost by Middlesex.

In Stuart's case, the county club loses out on a large part of their annual turnover. This risk factor could play a large part in whether counties continue with outgrounds for, although every effort is made to provide for inclement weather, it can, in no way, be as assured as the provisions made at the County ground.

Both Stuart and Vic entertained in their own individual ways, Stuart's littered with humour and his vast wealth of knowledge gained in over twenty-five years at county level, Vic's passion shone through, as always.

Next came a demonstration of deep spiking on the Essex square, performed by Keith Exton, Head Groundsman at Glamorgan CCC, using the tractor mounted Wiedenmann deep spiker. A somewhat nervous Stuart watched as Keith expertly started to spike down, with a close patterned set of pencil tines, over Stuart's beloved and lovely looking square; a process he had not had performed before.

However, Stuarts apprehension was soon relieved as Keith expertly worked his way across the square with no heaving problems at all, spiking down six or seven inches on a square that, because of the very dry weather we've had down south in October and November, must have been pretty hard.

Also going on was some spiking on the outfield. What I particularly liked was the chance to see some actual work being carried out on the ground rather than just going for a walk on the outfield.

Then we enjoyed a lovely buffet lunch, all at the expense - as was the whole day - of our sponsors. More networking, moaning about players, committees, umpires, birds, dog walkers and just about everyone else who wasn't a groundsman!

The afternoon session began with Andy Mackay, Head Groundsman at Sussex CCC, presenting on the role of the first class groundsman. Andy explained his entry route via the club game into the county scene. He then went on to give a frank and detailed explanation of how he tries to make working at Sussex, for his staff, as decent as he can regarding working conditions and hours worked.

Andy admitted he would like the pay for his staff to be better, but that he tried hard to make the working conditions as good as possible, and ensured decent time off is allowed for even in the season, as he considers a good life/work balance a vital part of a modern employer's responsibility.

It was good to see someone not only trying to raise the profile of groundstaff, but also trying to bring modern working practices into the Industry.

Andy then went on to explain the problems in improving the playing surface at Hove. Once, Hove had the reputation of having some of the more bouncy and pacey tracks around. But, over more recent times, this was not so. Andy's recipe for improvements has been to start a planned campaign of relaying the pitches with a consistent loam. This work is being undertaken by Andy and his team themselves as he feels he has more control over the end result. It may take a bit longer than getting outside contractors in, but he feels it is the way to go for him. This "be it on your own head" thread comes across as a message from all experienced groundsman it seems to me.

Yes, keep up with technology, listen to others but, at the end of the day, make your own decisions and go for it. If it all goes thrupennny bits up and it wasn't your idea, you will be blamed anyway! I think this is right, show me a man who has never made a mistake and I will show you either a liar or someone who has done nothing!

Andy said that he is planning on bringing in his newly constructed tracks over a staged two year period, so watch this space.

The final presentation was by Chris Wood, ECB Head Pitch Inspector and Keith Exton on aeration and taking it forward. The much awaited Cranfield report on spiking was mentioned by Chris, and he said that the report itself had been finished but was in the process of being put into a workable format for publication.

The history of cricket square aeration and the reasons for it were described, from the often criticised Patterson drum spiker to modern day vertical action aerators. Some interesting pictures of results of deep spiking were shown, with some very impressive root growth. There were also pictures of disasters caused by poor and inappropriate use of modern equipment!

Keith explained his thoughts on aeration and how, for many years, he has believed that solid tine spiking with thinner tines is the way to go. Keith not only spikes in this manner in the winter, but also in the season! Keith again emphasised the thought that he has always tried to think "outside the box".

It was also fairly obvious that Keith is very experienced and skilled in this process which, obviously to me, plays a large and vitally important part in the success of such methodology. I can understand how getting down further than the normal three inches or so one achieves with pedestrian vertical spikers makes sense, even on an average club square.

The importance of generating good and deep root growth was emphasised, as this not only helps to maintain a solid profile but also helps to develop a strong and healthy sward. Personally, would I try this deep spiking on my square? Well, it seems to me three factors are important. One, could I afford it? Two, would my square's profile take it? And three, could I find someone locally, skilled enough to do a good job? F

ood for thought, though.

The afternoon session ended up with a question and answer session.

Then Stuart put fifty pence in the meter and turned on the floodlights to start the evening session. We went outside to the square and Stuart talked us through the make up of each and every one of his tracks. It made interesting listening to hear him talk us through the differing profiles of the square. I must say it looked pretty good to me!

Stuart and his team showed us what gear is in their sheds and it was obvious how tight space is on the ground.

Then, another buffet for the people who stayed on for the evening session when there were further talks on Drill 'n' Fill, the

role of the Pitch Advisor and the role of the cricket development officer. Unfortunately, after I filled up with bacon butties and chips, I had to make a move back round the M25, but not before I was interviewed by Roger Moore of Dennis on my thoughts for the day. Roger finished up by asking me to describe in one word what I thought of the day. I said "Terrific".

I'm sure I speak for all the delegates when I say a very big thank you to Dennis Sisis and their team for a great day. Thanks to Stuart and Essex CCC for their hospitality. Dennis Sisis are at the very front of trying to help cricket groundsmen keep abreast of the latest thoughts in the industry, without ever once mentioning any of their or anyone else's products.

Elvis has left the building!