Essex head groundsman Stuart Kerrison admits he is like a coiled spring ready to burst into frenzied action when the signal is finally given for the 2020 cricket season to begin. 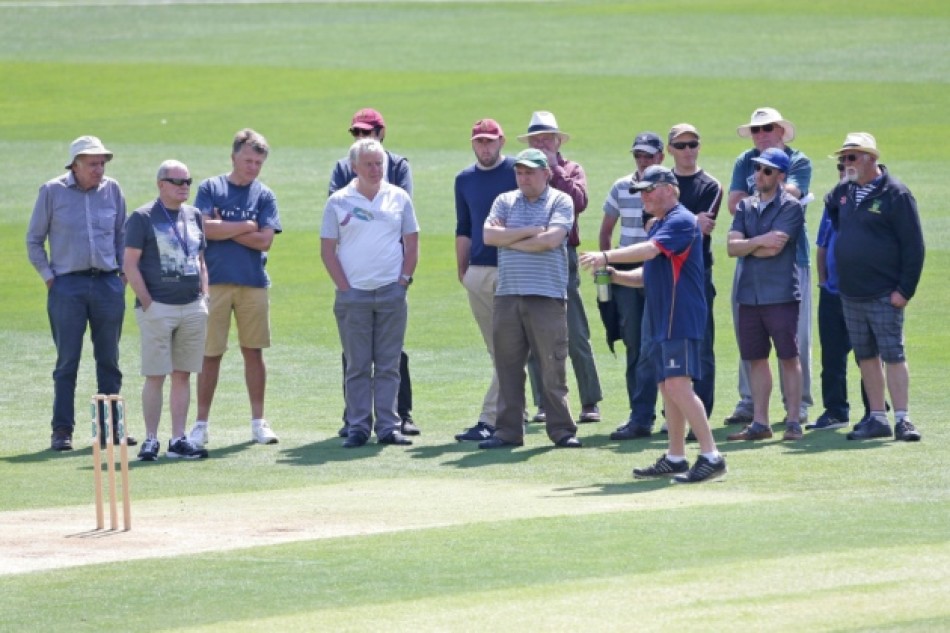 Essex head groudsman Stuart Kerrison takes spectators on a tour of the square during Essex CCC vs Nottinghamshire CCC, Specsavers County Championship Division 1 Cricket at The Cloudfm County Ground on 15th May 2019

The defending county champions were due to host Yorkshire in their first match on Sunday, but play remains suspended until May 28 at the earliest due to the coronavirus pandemic,

Kerrison said: "I'm just trying to keep things ticking along until someone says we're going to have nets in two weeks' time and we'll be playing soon after that.

"I think the longer it goes on, the more time we'll need to get on top of things. I'm doing the basic maintenance on my own at the moment, but that is taking up full days. I'm a bit knackered to be honest with you. It's non-stop work."

Surely, though, this is every groundsman's dream: no flannelled fools trampling all over their pride and joy?

"No!" says Kerrison emphatically. "Because then at the end of the day you just become a gardener. Then you are what people think you are: just grasscutters!

Essex were scheduled to start their title defence at The Cloudfm County Ground tomorrow and Kerrison would have been prepared as usual.

"We were due to have nets on March 26 and we were all geared up and ready for that. Then a couple of days before it was suddenly, boompf, shutdown," he added.

"The outfield had come on nicely and we'd dried out. From that really wet winter we'd had, I've worked out we've had 6mm of rain in the last 40 days. We've had nothing in the last three weeks. My outfield was starting to die.

"I've turned off the drainage pump to try and retain moisture so it's not being drawn into the drainage system. There is a little bit of rain coming, but that wouldn't have caused us many problems."

As soon as the stragglers headed to the Pavilion after nets on the eve of T20 Finals Day last September, the tractors were straight into action, scarifying the square as work began on the ground for this season."Because the way the fixtures fell, we finished here at Chelmsford the week before the season itself, and that made all the difference to us and gave us a head start," added Kerrison.

It has been a busy winter as the club have laid 15 hybrid strips on the 25-wicket square. They are not yet sanctioned for use in four-day cricket but will be used for some T20 games and as practice pitches.

"From what I've heard from other guys around the country who've had them, there have been no negative reports, it's all been positive," Kerrison said.

The biggest challenge has been reseeding the outfield where a metre-deep trench was dug, nine feet in from the boundary, as part of the installation of four new floodlight pylons.

"The last two weeks I've managed to get grass growing on it, I've literally just come off the field having watered it to keep it alive," added Kerrison, who has spent 36 of his 52 years at Chelmsford, the last 31 as head groundsman.

"Since I started we've won many, many trophies, so I've seen the glory days. Hopefully we're in the middle of a glory spell right now," he concluded.