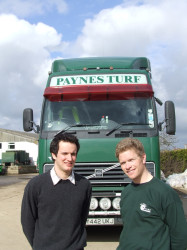 Running four lorries daily to deliver their turf products to customers in south-east England, Paynes Turf (F.E.Payne and Son) use a high quantity of road diesel. Added to this, five other vehicles owned by the company are diesel fuelled and this led the company's Stephen Payne to look into a greener alternative to conventional fuel to reduce their business carbon footprint.

A chance conversation in early January 2007 with good friend Adam Brown, partner of Anglian EcoFuels Ltd. from Great Holland near Frinton-on-Sea has led Paynes to now run their entire fleet on biodiesel.

Since receiving their first batch of biodiesel in January, Paynes has used it across their entire road going fleet. Initial checks with all vehicle manufacturers led to no perceived warranty or running issues and this led the company to pursue the exercise without worry, despite some bad press on the quality of some biodiesel products available but Paynes were reassured that Anglian EcoFuels Ltd.'s product was of the highest standard.

In the first two months of use, the company has been extremely satisfied with the quality of product and service from the company, witnessing no problems with engines or reduced fuel consumption. Stephen Payne comments: "we decided to go to biodiesel for a variety of reasons, one being to reduce our carbon footprint.

We grow a 'green' product in turf and we felt that delivery was our most 'un green' part of our business. Our main rivals use external hauliers so they cannot dictate that these operate on biodiesel but we have the choice. Also, we are supporting a new local business in Anglia EcoFuels Ltd. who supply us as and when we need diesel - we merely call up to order and it is with us the same or next day."

Anglian EcoFuels Ltd. is run by Adam Brown, who operates in partnership with his father from their base at Dairy House Farm, Great Holland.

Established in May 2006, Adam wanted to create his own sustainable diversification on the family farm to supply local fuel to local people. His current customer base is mainly at present within the Tendring Hundred region so transport of the diesel is generally only a few miles.

The fuel produced is 100% biodiesel, manufactured by using processed soya oil collected from industrial cookery sources. The oil is converted to diesel on farm by use of a chemical reaction involving methanol and sodium hydroxide and is then ready to use as a clean biodiesel fuel in most road going diesel engines.

Adam aims to supply Paynes Turf with their annual 100,000 to 140,000 litres usage of diesel in 2007 and to other customers around the area, usually on demand. He is encouraged that business will ever increase if the guidelines laid down by the government regarding biofuel come to fruition: "By 2020, 10% of all road fuel must be renewable, whether that be bio-ethanol, biodiesel or other sources, so the market will become stronger with demand" he comments. Adam is also aiming to make his fuel truly local.

He is testing oilseed rape as a potential diesel source, not only to be grown on the family farm but locally by other farmers on a contract basis. This will ensure a truly local fuel for local consumers, with a totally minimal carbon footprint.

As a further aim to reduce carbon footprint for both companies, Anglian EcoFuels Ltd. are looking into utilising Paynes' lorries running empty back from London to collect processed oil, so reducing extra unnecessary transport. "It makes sense to utilise Paynes to bring back return loads of oil when they are running on our biodiesel" said Adam. Stephen agrees, adding "we are two local companies who are aiming to assist each other in our growth while doing our bit for the environment."
Photo Caption (COGPAYANG-Payne and Brown): Adam Brown of Anglian EcoFuels Ltd. (left) is pictured with Stephen Payne of Paynes Turf. Behind is one of Paynes' fleet of four lorries that have been running on biodiesel since early January 2007.