Etesia chose IOG SALTEX 2011 to launch an amazing fifteen new products, proving that the research and development teams in France have been extremely busy, with a heavy emphasis on Bio-friendly and four wheel drive products.

The first of the new products unveiled was a range of machines to be known as the ET Robot Mowers. There are three models available - ETm44, ETm65 and the ETm105.

The ETm44 is the baby model in the range and is dedicated for small areas. This model is perfect for anyone who wants to stop having to mow small and medium-sized areas of grass of up to 5000 m². Nine cutting positions from 22mm-75mm are available with a speed of up to 2km. Two driving wheels with six cutting blades on two decks and weighing only 26kg ensure a quality cut throughout the year.

The ETm65 is perfect for large open areas cared for by local authorities and companies that find mowing a considerable waste of time and money. It works very quietly, so can be used during the day or at night, whatever the weather, on grassed areas covering up to 9000 m². Eight cutting positions from 22mm-65mm are available with a speed of up to 3km. Two driving wheels with nine cutting blades on three decks, weighing only 36kg and capable of working up to 30% camber ensure that local authorities will have peace of mind allowing this machine to go on its business.

The ETm105 offers the top performance in our range with a 105cm cutting width and covers up to 20,000 m². Its capacity enables it to deal with very large areas, such as golf practice ranges, football and rugby stadia, racecourses, etc. Energy consumption is kept to a minimum, beating all energy-saving records. Eleven cutting positions from 22mm-80mm are available with a speed of up to 3.6km. Two driving wheels with fifteen cutting blades on five decks, weighing 51kg prove that this is no toy and capable of working in the most rugged of conditions.

First seen as a prototype model last autumn, is the new electric Bahia, which will be in full production later this year. The Bahia M2E is the world's first fully electric ride-on cut and collect mower. Featuring all of the benefits of its petrol "brother" which has made the Bahia a users favourite, with the added advantages of no odour, zero emissions, low noise, low vibrations, reduced maintenance costs and reduced health and safety issues for operators. The new model has been developed around the chassis of the petrol-powered Bahia models and effectively has the same compact look with a cutting width of 80cm and grass box capacity of 240 litres. Power comes from 4 acid/lead batteries producing 48V, 115 ah and conveniently located under the operator's seat which can be re-charged within six hours via a 16amp 200v power socket. 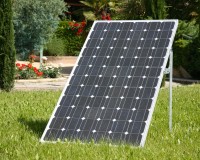 Cutting and collecting is directly comparable to the petrol version with a guaranteed mowing time of 2 hours or 2500m². Both the drive and cutting transmissions are 100% electric. This machine has recently been on trail at both the Church Commission in London and Forest Green Rovers - a Blue Square Premiership League club aiming to be the world's first entirely green and eco self-sufficient club.

An optional solar panel for re-charging is also available and is on show outside - further enhancing the green credentials of this new machine. This is another machine to join our Bio concept family.

Two new ride-on mowers are next. Both are 4 Wheel Drive with one being a dedicated high performance mulcher with a 144cmm cutting width - the H144MX. The other being the HVHPX - an LPG powered 4 wheel drive version of the 124P which was launched at SALTEX last year. These two new machines mean that it's two more machines for the Bio concept and also two more with the letter "X" denoting 4 Wheel Drive.

Three new ride-on brushcutters have also been launched. All three models share the distinctive body styling of the highly popular Attila AV98. Starting with the smallest AV88, it has a 16hp Briggs & Stratton Vanguard engine, 88cm cutting width and like the rest of the Attila range, hydrostatic drive. The chassis has a strengthened structure welded tubular chassis for a better driving position, and along with an electric start offers operators a high comfort level. An easily adjusted cutting height along with a rack-and-pinion steering system means that Etesia has paid special attention to sound and vibration levels to reduce them to a very low level. 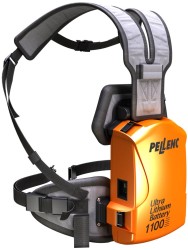 The second is the new shape AV95 which now incorporates front brakes for better control on descents. Power comes from the twin cylinder 18hp Briggs & Stratton Vanguard engine which provides outstanding performance in demanding working conditions and combines reliability for a long life and a 95cm cutting width. The cutting height can easily be adjusted by a centralised lever with five positions from 25mm to 85mm.

Now to the last of the three new models, the AV98X, again 4 wheel drive. This unit has powerful motors in the rear that also power the front wheels. Power is supplied by a 23hp Briggs & Stratton Vanguard engine with a 98cm cutting width. The new model also has a built in slope indicator for safer driving at all times.

So now to the new Pedestrian mowers, starting with the Pro 53 mower (LKX) which offers exceptional handling and drive thanks to the new hydraulic transmission with differential lock. It guarantees very flexible forward movement. Controlled at the handlebar, the differential lock offers greater traction, in addition to a downhill braking effect for enhanced safety.

Following this, Etesia have the ME53C - a dedicated mulcher fitted with a Kholer X7 engine. On test, Etesia say that this engine seems to have a significant improvement over its predecessor.

Lastly on the Etesia front is the Pro 46 PHG2. Etesia have long been recognised as producing machines for the commercial operator, and over the course of six years we have been working with the UK‟s largest grass cutting local authority to produce a machine capable of meeting their demanding workload. As a result of this they have now produced a 46cm walk-behind mower with a large capacity 2.5 litre petrol tank designed to allow the operator to complete a full day's work without the need to re-fuel. A mulching kit is also available.

Now on to the new Pellenc products, which the company says fit perfectly into the Bio concept family. Etesia UK have been the exclusive UK importers of Pellenc products since April last year and now have approaching 40 dealers across the country and are rapidly extending the dealer network as we speak, with new regions being offered to interested parties. 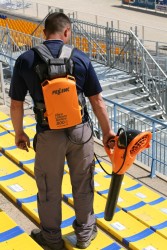 Invention and innovation are passions of Pellenc, which have led the group to much of its success. Throughout their entire range of machines, they try to offer added comfort and greater productivity in environments where work can be exhausting. The end user is the main focus of all of their development procedures, which drives their engineering teams to optimise the design of tools.

Pellenc are now pleased to offer a new solar charging station - the Solerion for use with all of the tools and a new highly powerful multi-function battery - The ULB1100, the next generation battery.

Once the Solerion panels are installed, they use an MPPT load regulator. The MPPT function stands for Maximum Power Point Tracking. This function basically scans the photo panel cells and monitors the power drawn from them, and then optimises it with the battery connected. This detection is all done automatically. A maximum of three batteries can be charged at one time, by using three separate convertors. A Poly5 battery can be recharged in normal sunlight levels in under just three hours as opposed to five hours on a standard 2.2a mains charger.

The new ULB1100 battery has been designed to deliver higher power. It is primarily aimed at the most "power-hungry" tools in the Pellenc range. The lithium polymer components heat up less allowing higher uninterrupted power when cutting. The new battery consists of lithium polymer elements, which have a very high power-to-weight ratio. As an example the 1100 weighs the same as the old 800 batteries, but will power a C20 chainsaw for up to 2 days and the Lixion shears for a staggering 10 days!

The Airion vacuum blower was officially launched earlier this year in France and then Demo Park in June. Officially it was launched to the UK market at this year's show.

The Airion hand held blower is a tool intended for cleaning roads, parks and gardens. Weighing only 2.6 kg and with a noise level of 80 db, it is the lightest and quietest of professional blowers currently available on the market and can be used near sensitive areas such as schools, hospitals and residential areas. It is very comfortable to hold owing to the soft touch new generation handgrip and is optimally balanced for natural tilting towards the ground. The Airion has four speeds which enable the operator to optimise and adjust the speed of the air expelled according to the working environment and the site to be cleaned - dry leaves, wet leaves, on gravel, etc.

Keeping the speed selector button pressed instantly selects the booster mode, giving a maximum blow of 800m³/hr. This function is especially useful for picking up wet vegetation or heavy waste matter. This mode is also available for all speeds. The progressive trigger enables the airflow to be controlled very precisely. The principal advantage is efficient battery management. On roads, the trigger can prevent the scattering of gravel. The inlet grille has been specially designed to reduce the sound level as much as possible while maintaining exceptional blowing performance.