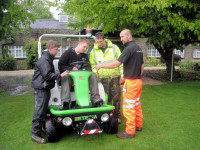 In an effort to help students in landscaping and horticulture gain experience in operating outdoor powered equipment, European manufacturer, Etesia has offered machines under permanent loan to Gloucestershire's Hartpury College. The arrangement allows the company's South of England demo fleet of pedestrian and ride-on rotaries to be stored at the college and used for practical course-work - it also means that Hartpury's grounds team can work with equipment that they would not otherwise have.

Commenting, Etesia's UK General Manager, Les Malin says "This initiative means that when the machines are not out on demonstrations, the college has the opportunity to use our groundscare equipment for teaching purposes. The students gain grass cutting skills and can also try our wide range of turfcare and other attachments for the ride-ons."

Hartpury College is an Associate Faculty of the University of the West of England. Within its academic environment, students of all ages and abilities work towards gaining qualifications and develop the necessary vocational and life skills that will take them forward to careers in a variety of land-based industries. They already have an Etesia Hydro 124DN 25hp Lombardini diesel-engined ride-on on 3 year lease-hire. This 124cm rotary mower has anti-clog cutting and collecting, high tip emptying and top working speed of 16km/h. Low decibel ratings, make it ideal for maintaining grass in a college environment.

Sports Turf Manager, Stewart Ward and his team of seven groundsmen maintain the 800-acre campus. They work closely with college lecturers and have active involvement in the teaching sessions. "The practical nature of our courses provides hands-on experience which is so valuable in future careers." explains Stewart, adding that in addition to mowing skills they also teach routine care such as oil and blade changes plus general trouble shooting.

With five football and eight rugby pitches, plus other sports and recreation facilities, there is plenty of turf to maintain. Stewart and his team have recently shown students Etesia's front-mounted scarifier. Fitted to the hydraulic system on their Hydro 124DN ride-on rotary it has two front-mounted floating heads. "In addition to learning how quickly it scarified and collected in one pass, they were able to see the benefits of removing all the rubbish from the turf. The debris was tipped into a trailer and taken away." he explains, adding, "During February's heavy snow, we fixed Etesia's rear-mounted salt and sand spreader to the Hydro 124DN and cleared the walkways so that students could get in and out of hostels and lectures. We had it done by 11am - previously it took all day with shovels and barrows!"

No attachments were required when Etesia's ride-on was used to clear leaves and litter from hard surfaces and grassed areas, demonstrating how it speeds up the process, allowing more time for the grounds team to get on with other jobs. "All the debris is collected in one pass and deposited into the large 600 litre collector. Leaf litter is composted and used as dressing on the flower beds." Stewart adds, pointing out that having the equipment on site is a real learning experience for students who are now actively involved in the day to day grounds maintenance programme.

The fact that the project has proved to be a success for Etesia is summed up by Les Malin, "Through this initiative, Hartpury College is now a centre for our own training, including service courses for our dealers as well as college workshop personnel. We would now like to set up similar centres further north and work with other colleges." he concludes.