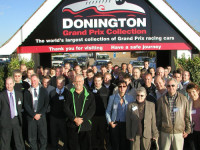 Etesia dealers took a lap through the world's largest collection of Grand Prix cars at Donington Park as part of the company's annual Dealer Awards event. First hand racing experience from the tour guides revealed fascinating stories of the drivers and their cars, including Mika Hakkinen's West McLaren Mercedes in which he won his first Grand Prix.

In the evening over 70 attended the presentation of Awards at the Bosworth Hall Hotel in Warwickshire, followed by dinner and hilarious entertainment from Steve Smiley who later in the evening introduced a surprise guest appearance from "Elvis Presley"!

During his speech, Etesia's UK General Manager, Les Malin, said, "This year, we have decided to create a new category of awards - these are aimed solely at recognizing the commitment and dedication to Etesia of certain individuals over the last 12 months." In this category Award winners were:

Dealers recognised for their achievements in selling Etesia products were:

For the third year running the top award went to a dealer who continues to go from strength to strength with Etesia - the Award "Etesia Dealer of the Year for 2005" went to Burrows GM Ltd.

During the event it was announced that Etesia was also celebrating 10 years since they first opened their UK headquarters in Warwick. To mark the occasion all delegates were presented with a commemorative gift.