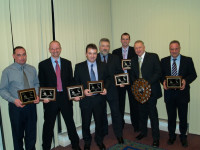 Etesia chose Telford Holiday Inn as the venue for their 13th annual Dealer Awards event, held in mid-November. Following an afternoon conference, dealers from across the UK and Northern Ireland took advantage of the opportunity to try machines from Etesia's new range for 2007, including the latest Hydro 100 Diesel ride-on rotary models.

During his address, Managing Director, Patrick Vives reported that, in spite of the very poor trading and climate conditions in this country, Etesia's overall figures for the 2006 season were up 7 per cent - a positive situation which is the reverse of that experienced by many other manufacturers in the industry.

Awards were presented to seven UK dealers. For the fourth consecutive year the top accolade for Etesia's UK Dealer of the Year 2006 went to Burrows (GM) Ltd

Winners in other categories were:

Patrick Vives praised all dealers in the UK network for their hard work and wished them continued success with both the new and existing ranges during the 2007 sales season.