A new regulation from the EU, to be agreed on 4 December will place stringent controls on 37 non-native invasive species from 1st January 2016. These species have been identified as being "of Union concern", meaning they have been assessed as posing such a high risk of invasion within one or more EU member states, that a co-ordinated, Europe-wide response is needed to limit their spread. It will therefore become an offence in the UK to keep, cultivate, breed, transport, sell or exchange these species, or release them, intentionally or unintentionally, into the environment. 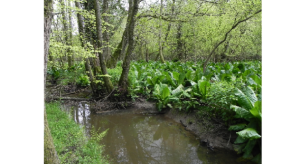 Occurrences of American skunk-cabbage in the wild have increased by 84% in 15 years and at one site in the New Forest, Hampshire, where nearly 100% of native flora has been excluded in places, control has cost over £9,000 since 2010.

Occurrences of curly waterweed in the wild have increased by 41% in 15 years. In Lough Corrib, Ireland, it infested 100 ha of lake in 160 bays, negatively affecting native fish, invertebrates and plants. Cost of control has been over €1.5 million (£1.06 million).

Plantlife welcomes the new regulations as a mechanism to prevent future invasive species becoming established in the wild. Dr Trevor Dines, Plantlife's botanical specialist, says "Although harsh, these stringent new controls are one of the most effective ways to stop species at an early stage of the invasion process. It's much better to 'nip them in the bud' - getting on top of the problem now - before eradication at many sites in the wild becomes difficult and prohibitively expensive. As a keen gardener myself, I'm happy to live without a few plants that can wreak havoc on our countryside, and there are plenty of alternatives to choose from."

It is worth noting that only a tiny proportion of the plants we grow cause problems in the wild. Just 8 species of garden plants are listed on the new regulations out of 70,000+ species that are available through the British horticultural sector. The vast majority of our non-native species are utterly benign in the wild and many, such as snowdrop and poppies, are much-loved and culturally important additions to our wild flora.
What does it mean to us the UK?

UK governments will have 18 months to put effective management measures in place to control the newly listed species and limit their spread accordingly, although a full two years is allowed to sell off existing trade stocks.

If any of these species are already growing in your garden, there will be no action to remove them and it will not be illegal to grow them, so long as you act responsibly and don't encourage them to spread or escape, e.g. by following appropriate horticultural codes of conduct.
However, sites in the wild where these invasive species are causing problems will have to be restored and costs may be recovered in accordance with the 'polluter pays' principle, meaning that whoever caused them to spread or be released into the wild may have to foot the bill for subsequent control.

For the original article, visit prolandscapermagazine.com.