The European Union on Thursday delayed a vote on renewing sales approval for the pesticide glyphosate, used in Monsanto's weed-killer Roundup, amid a transatlantic row over whether it may cause cancer 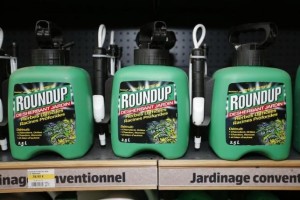 Experts from the EU's 28 nations had been due to vote on a proposal, seen by Reuters, to extend by nine years licensing of the herbicide, widely used by farmers and gardeners.

EU sources said the vote was postponed due to opposition in France and Germany, which have big farming and chemicals industries.

Without those two countries' support, the European Commission lacks the majority it needs for a binding vote: "Since it was obvious that no qualified majority would have been reached, a vote was not held," a Commission spokeswoman said.

The EU executive had hoped for a decision to stop the clock ticking on a six-month phase-out period for glyphosate products when the existing authorisation lapses at the end of June.

Germany had planned to abstain from voting because ministries run by different parties in the ruling coalition remain at odds, a government spokesman told Reuters.

In response to opposition, the EU executive had already postponed a vote on reapproval in March and shortened the proposed licence to nine years from 15.

The new proposal would also ban some particular products because of the substances they combine with glyphosate, which could add to risks. The banned "list of co-formulants", includes POE-tallowamine from glyphosate-containing pesticides.

Last month, the European Parliament recommended that glyphosate should only be approved for another seven years, and should not be used by the general public.

As the debates were continuing in Brussels, German chemicals group Bayer made an unsolicited takeover bid for U.S. seeds company Monsanto, for which the regulatory controversy over glyphosate has been one of a number of recent problems.

Contradictory findings on its carcinogenic risks by various scientific bodies have thrust glyphosate into the centre of a row involving EU and U.S. politicians, regulators and environmental and agricultural researchers.

Experts from the U.N.'s Food and Agriculture Organization (FAO) and World Health Organization (WHO) this week said glyphosate is unlikely to pose a risk to humans exposed to it through food. It is mostly used on crops.

The finding matches that of the European Food Safety Authority (EFSA), an independent agency funded by the European Union, but runs counter to a March 2015 study by the WHO's Lyon-based International Agency for Research on Cancer (IARC).

That agency said glyphosate is "probably" able to cause cancer in humans and classified it as a 'Group 2A' carcinogen. It says it assesses whether the substance can cause cancer in any way - regardless of real-life conditions on typical levels of human exposure or consumption.

Environmental groups have questioned the independence of the bodies, and called for the EU to err on the side of caution.

"The Commission has continued to ignore the concerns of independent scientists, MEPs and European citizens," Greenpeace's EU food policy director Franziska Achterberg said in a statement.

"It's time for the Commission to change course."

For the original article, visit www.reuters.com.